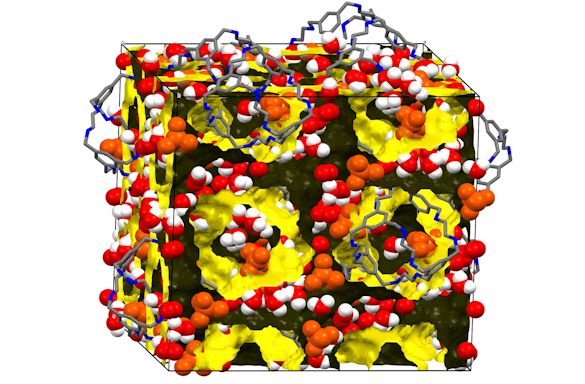 Image: The structure of one of the cage crystals loaded with water

Scientists at the University of Liverpool have made an important breakthrough which could lead to the design of better fuel cell materials.

In a research paper published in Nature Communications, they demonstrate how they synthesised nanometre-sized cage molecules that can be used to transport charge in proton exchange membrane applications.

Proton-exchange membrane fuel cells (PEMFCs) are considered to be a promising technology for clean and efficient power generation in the twenty-first century.

PEMFCs contain a component called a proton exchange membrane (PEM), which carries positively-charged protons from the positive electrode of the cell to the negative one. Most PEMs are hydrated and the charge is transferred through networks of water inside the membrane.

To design better PEM materials, more needs to be known about how the structure of the membrane enables protons to move easily through it. However, many PEMs are made of amorphous polymers, so it is difficult to study how protons are conducted because the precise structure is not known.

Scientists from the University’s Department of Chemistry synthesised molecules that enclose an internal cavity, forming a porous organic cage into which other smaller molecules can be loaded, such as water or carbon dioxide. When the cages form solid materials, they can arrange to form channels in which the small ‘guest’ molecules can travel from one cage to another.

The material forms crystals in which the arrangement of cages is very regular. This allowed the researchers to build an unambiguous description of the structure using crystallography, a technique that allows the positions of atoms to be located. The molecules are also soluble in common solvents, which means they could be combined with other materials and fabricated into membranes.

They measured the protonic conductivity of these porous organic cages after loading the channels with water, to assess their viability as PEM materials. The cages exhibited proton conductivities of up to 10-3 S cm1, which is comparable to some of the best porous framework materials in the literature.

In collaboration with researchers from the University of Edinburgh, Center for Neutron Research at National Institute of Standards and Technology (NIST), and Defence Science and Technology Laboratory (DSTL), they used a combination of experimental measurements and computer simulations to build a rich picture of how protons are conducted by the cage molecules.

Two distinctive features of the proton conduction in organic cage crystals were highlighted as design principles for future PEM materials. First, the cages are arranged so that the channels extend in three dimensions. This means that the movement of the protons is not limited to a particular direction, as in the case of many porous materials tested so far.

Second, the cages direct the movement of the water molecules, which means that protons can be passed between them quickly. Also, the cages are flexible enough to allow the water to reorganize, which is also important when protons are transported from one water molecule to the next over longer distances.

Dr Ming Liu who led the experimental work, said: “In addition to introducing a new class of proton conductors, this study highlights design principles that might be extended to future materials.

“For example, the ‘soft confinement’ that we observe in these hydrated solids suggests new anhydrous proton conductors where a porous cage host positions and modulates the protonic conductivity of guest molecules other than water. This would facilitate the development of high temperature PEMFCs, as water loss would no longer be a consideration.”

Dr Chong has recently been appointed as a lecturer in the University’s Materials Innovation Factory (MIF). Due to open in 2017, the £68M facility will revolutionise materials chemistry research and development through facilitating the discovery of new materials which have the potential to save energy and natural resources, improve health or transform a variety of manufacturing processes.

Image below: The Materials Innovation Factory 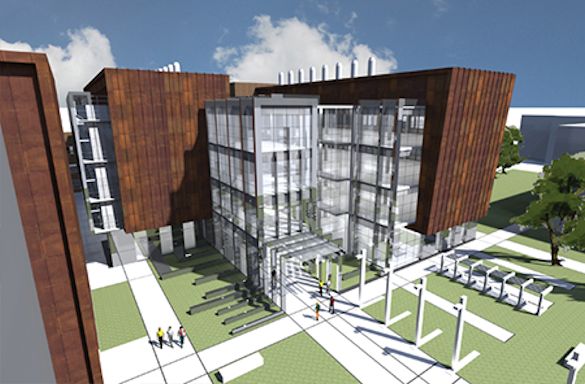