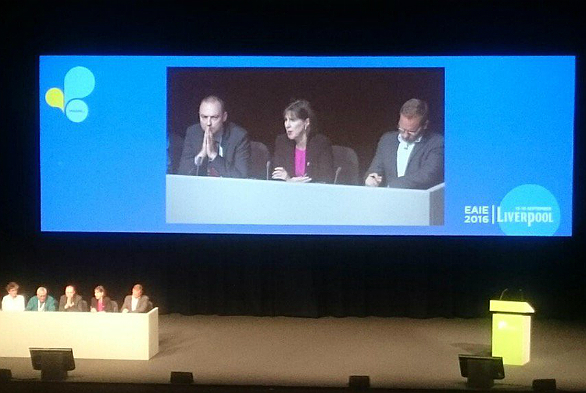 The 28th European Association for International Education’s (EAIE) annual conference takes place this week in Liverpool, and we’re shining a spotlight on some of the key conference events that the University is involved with.

Speaking at the session ‘Brexit: the future of Europe and the EU‘, Vice-Chancellor Professor Janet Beer explained that with a lot of thought and a clear strategy, there could be positives for the UK’s higher education sector.

An email to thousands of students telling them it was business as usual was one of the first things Janet Beer did on 24th June, the day that Britain woke up to Brexit. The University of Liverpool Vice-Chancellor re-assured them that the university aimed to keep positive connections with the EU and would continue to value highly its international students.

Perhaps it is its history as the biggest migrant port in Europe and gateway to the world, The Beatles or its famous football team that has helped to make the city on England’s north-west coast so recognisable world wide. For whatever reason, the University that bears its name has become a global brand and its Vice-Chancellor intends to keep it that way.

She never wanted Brexit and played a key role in campaigning vigorously for a Remain vote, but now says that following the decision universities are “putting their best feet forward” to protect their high reputation for world-class research and Britain’s position as the second most popular destination for international students after the United States.

“I’ve said it in Hong Kong and I’ve said it in China and I will continue to say it everywhere I go. The UK remains very welcoming as a nation and you will still get student visas in just the same way. We aim to make sure that there will be easy traffic to and from universities in the rest of Europe. I don’t want my children or students at Liverpool or anywhere else to think their life chances are limited by the vote to leave the EU. If they want to take a job in Vienna, they should be able to take a job in Vienna. If they want to spend a semester in Stockholm then they should still be able to do so,” she says.

Nearly three months after the referendum vote to sever ties with the EU after 43 years, Professor Beer has welcomed educators from across the globe as the university hosts the 2016 conference of the European Association for International Education (EAIE). Speaking on Wednesday September 14 at the conference session “Brexit: the future of Europe and the EU”, she explained that UK universities are independent bodies and will be working with the country’s learned bodies and research councils to make sure the importance of higher education and research and development to the British economy are high on the agenda.

“One of the strengths of our universities is their ability to adapt, and we are determined to turn it to good; to meet the challenges head-on while seeking out new opportunities to reach out to the world,” says Professor Beer, who has a national role as the vice-president of UUK, the vice-chancellors’ umbrella body.

She outlined the UUK’s dual strategy of protecting ties with Europe while expanding collaboration further afield. UUK will renew its calls for international students to be taken out of the country’s immigration statistics and press for more flexibility in post-study visas.

“We will continue to collaborate with our partner universities in Europe and there is no reason to believe that it will be any more difficult for EU academics to live and work in the UK, given the contribution they make to higher education and the economic wellbeing of our nation,” she says.

While Brexit was “not the preferred option” of university leaders, with a lot of thought and a clear strategy, there could be positives for the UK’s higher education sector.  Britain will need to re-define and re-draw its relationship with the rest of the world: “If we really put our backs into it then we can grasp this as an opportunity to undo not only negative repercussions from the vote but also previous negative publicity over the Government’s rhetoric on immigration and the visa and post-study work changes,” she says.

“Theresa May wants an industrial strategy and part of that must be a coherent and compelling strategy for international research and students. We have to use our extensive networks of students, staff and alumni to make sure the message gets out that UK universities genuinely want to attract students and staff from all over the world and to ensure that we stay at the cutting edge and maintain our high reputation for international research collaboration.”

So far there have been two positive announcements – the UK government’s guarantee to support current EU-funded projects, and the commitment to provide tuition fee loans for current EU students and those starting courses this autumn for the duration of their studies. However, applications for 2017/18 are already open and UUK fears that applications from EU students will fall significantly without a similar guarantee for them, before the terms of the UK’s exit are decided.

The Government has confirmed that there has been no change to the rights and status of EU university staff currently in or contemplating coming to the UK.  In the longer term it will depend on the negotiations, and Professor Beer is pressing for a guarantee that all EU nationals currently working in universities can continue to do so on the same terms.

As far as research grants from Europe are concerned, however, it is not just a case of replacing the current funding, Professor Beer warns.

”We need to see the Government make serious additional investment in science research and development, and also in our future research capacity and ability to collaborate internationally,” she says.

Universities themselves will also need to be proactive, since about half of UK research is currently carried out with European partners.

“Brexit takes us out of our comfort zone and, while it is important to maintain existing collaborations, we should reflect on why there has been this concentration on EU partnerships.  Was it because our neighbours were our first port of call?  Would countries further afield facing wider challenges be a more challenging fit?” Professor Beer asks.

International education is especially important to the University of Liverpool and has grown in size and stature over the last decade through its many successful programmes of transnational education. It has more Chinese students at its Liverpool and London campuses than any other UK university and, in a ground-breaking initiative, founded a new, top-tier university in China in partnership with one of China’s leading state-owned institutions. Liverpool is also Europe’s largest provider of online post-graduate degrees through its collaboration with Laureate Education Online.

Some UK universities are examining the possibility of setting up campuses in EU countries to help preserve the relationship, but Professor Beer does not think Liverpool will go down that road.

“I can, however, imagine that a UK institution might work with a European partner to develop programmes in third countries – perhaps the UK and Spain getting together to provide programmes in South America,” she suggests.

One thing she has learned from the Brexit experience is that universities need to get better at communicating and engaging with the general public.

“We have a huge resource of expertise and evidence that can counter the politics of fear and its appeal to base emotions, ” she says.  Michael Gove, the Vote Leave co-chairman and former Justice Secretary and Secretary of State for Education, was wrong when he said the public had “had enough of experts”, Professor Beer says.

“For example, a 20-minute talk by our law professor Michael Dougan on the legal implications of Brexit on our website was downloaded six million times,” she says.

Perhaps its time to have more academics in the media – guests on Breakfast TV or Radio 1’s Newsbeat? “That would be great,” she says. But for now it’s time for the Vice Chancellor to concentrate on the world stage which, for the University of Liverpool, is “business as usual”.

For more information about the EAIE conference please visit: https://www.liverpool.ac.uk/internationalisation/eaie-2016/