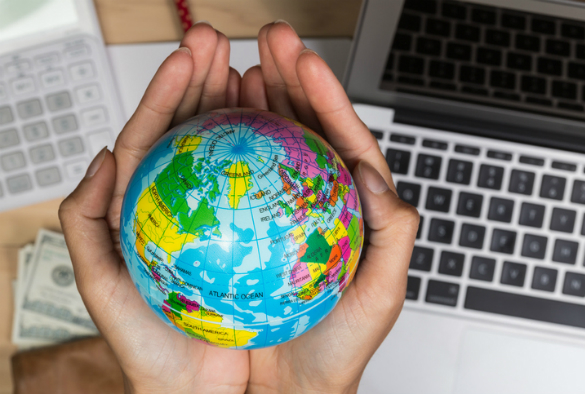 The 28th European Association for International Education’s (EAIE) annual conference is taking place this week in Liverpool, and we’re shining a spotlight on some of the key conference events that the University is involved with.

Deputy Vice-Chancellor Patrick Hackett spoke at the session ‘Developments in transnational education: how to sustain a high-value and equitable partnership, so here we focus on how the University has developed a strategic approach for the development of TNE projects.

The University of Liverpool is the biggest provider of online post-graduate education in Europe, has more than 7,000 international students on campus, and also co-founded a ground-breaking international university in China that celebrates its tenth anniversary this year.

The university has not followed the traditional transnational education routes of setting up branch campuses or licensed and accredited programmes, however. Patrick Hackett, Liverpool’s Deputy Vice-Chancellor, outlined its strategy and his thoughts on the future of TNE in a session on Developments in transnational education: how to sustain a high-value and equitable partnership at the annual conference of the European Association for International Education taking place in Liverpool from September 13 to 16.

“Liverpool has its own distinctive approach to international education that fits with its mission of improving access to higher education, and at its heart is a drive for the creation of sustainable, equal partnerships that benefit both sides,” he says.  “There is an edginess to Liverpool, we are not conventional and we do think differently. Liverpool is an outward looking city and that applies to the university as well,” he says.

Over the last decade the case for TNE has become more compelling because of risk in the international student market, such as the dramatic fall in the number of students coming to the UK from the Indian sub-continent, he adds.

According to a recent HE Global report – The scale and scope of UK higher education transnational education –  99 of the UK’s 134 higher education institutions are providing courses for students that study wholly outside the UK.  Four in five intend to expand their TNE provision over the next three years. The report also found that there are only 15 countries in the world where the UK does not offer any higher education TNE.

What makes Liverpool distinctive is the scale of its sizeable overseas operation, Hackett says. It has taken “vison, drive and an appetite for risk”, but the careful selection of partners and investment in quality control to protect the brand has been key to the university’s international expansion.

The University of Liverpool online programmes are provided through partnership with a private sector company, Laureate Education Online. In total there are now over 30 postgraduate courses including two professional doctorates with student enrolments from over 170 countries. Programmes are developed in partnership and Liverpool oversees and monitors quality and standards, also providing academic supervisors for the doctoral programmes. The result is a financially sustainable model, he says. “We have not made huge profits from our online learning, but it has enormously enhanced our reputation.”

Online study will play an even more important part in future, says  Hackett, because universities are unlikely to be able to provide enough physical places to meet the huge, growing demand for affordable higher education. Another success has been the decision in 2003 to found a new international university in China in partnership with Xi’an Jiaotong, one of China’s leading universities. The Xi’an Jiaotong-Liverpool University (XJTLU) opened in 2006 with 164 students and now has 10,000 with plans to expand to 15,000.  Already it has built a reputation that enables it to recruit from Chinese students at the top of tier one, the highest level of Gaokao, the school leaving exam.

Liverpool does not profit financially from the new university directly but indirectly through the £30 million a year discounted tuition fees paid by the large number of XJTLU students who take up the option of spending time in the UK. Liverpool’s strong profile in China has also increased the number of post-graduate students it attracts to its Liverpool and London campuses. Professor Janet Beer, the University of Liverpool’s Vice Chancellor, who is speaking at the EAIE conference session Making the right match: TNE marriages of equals, says one of the reasons why the XJTLU venture has been so successful is that the Chinese see it as partly their own, not a branch campus of a UK institution.

The Chinese government wants to reform its higher education system and is backing engagement with overseas universities that offer active, research-led learning, says Professor Youmin Xi, XJTLU’s  Executive President, who is speaking at the conference session on Building equitable partnerships: XJTLU 10 years on.

“The university bears both our names – it is not a branch campus but an independent, international university that combines the best from the UK and China.  From China we have the tradition of very hard-working students and a solid base of knowledge.  From the UK we have the active style of teaching and learning that requires the student to make choices, work independently and do their own research to solve problems, rather than cram knowledge from text books to pass a test,” he says.

XJTLU takes its role as “a disrupter” to the Chinese higher education sector very seriously.  “Over the past few years we have organised conferences and training programmes and more than 700 universities have sent people to them,” says Professor Xi.

China is the host country with the second largest number of registered TNE students, and Chinese students account for more than one in four non-EU students at UK universities.  Does the reform of China’s universities mean that fewer Chinese students will travel abroad for education in the future? It will take time to reform Chinese universities and even when it happens many parents will continue to want their children to go abroad for an international experience, says Professor Xi.

“China is still a very poor country for many normal families and it is a big burden to send their children abroad, so what I think could happen is that as higher education improves more students will choose to study at home and go abroad for a semester or for one or two years,” he says.

The British Council has monitored the growth of TNE over the last decade and predicts an even greater demand for international education by 2020, especially in countries with growing service sectors.  However, Michael Peak, its Research Manager, predicts that the term TNE will become obsolete.

“In the future I think the term TNE will be unnecessary because students will expect to get an international experience. These sorts of collaborations between institutions in different countries will become an integral part of the programmes,” he says.

The University of Liverpool is not resting on its laurels. Following the success of the joint-funded university model in China, it is now looking into the possibility of a similar collaboration with an African university, perhaps with backing from a Chinese institution. Meanwhile Hackett foresees future demand for more blended learning and study abroad years or semesters.

“It may be that we develop programmes with a year online and the rest on one or more campus.  We are seeing more appetite among our UK students for spending time abroad. This year we have launched our Year in China scheme and there has been a lot more interest in it than there would have been even five years ago. Liverpool students are living on an international campus here in the UK and increasingly seeing themselves as global citizens. The benefits of TNE go both ways.”

For more information about the EAIE conference please visit: https://www.liverpool.ac.uk/internationalisation/eaie-2016/