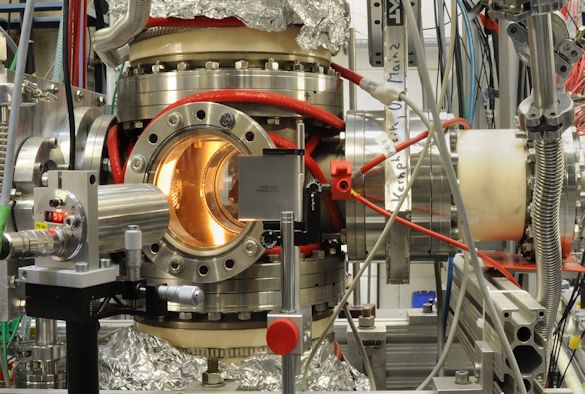 Image: Gas cell used to receive the nobelium isotopes, containing the filament, laser ionisation region, and alpha detectors above and below

Research published in Nature describes how laser spectroscopy has been successfully applied to reveal the atomic structure of a transfermium element, Nobelium, for the first time.

In a break-through experiment, researchers used a high energy 217 MeV beam of 48Ca ions to impact on thin isotopically-enriched lead foil targets. They then velocity-filtered the Nobelium products inflight, decelerated and delivered them into a buffer gas cell.

Here, a set of five tuneable lasers were used in an exhaustive search of a theoretically probable, but wide frequency range for an optical resonance.

Rates as low as 1 atom per second were sufficient for success, allowing location of an excited atomic state in such a heavy element.

Having no primordial isotopes meant that unlike conventional optical spectroscopy for nuclear structure studies, the atomic physics was completely unknown, and could only be studied “live” at an accelerator facility, with beam time at a premium.

Bradley Cheal, from the University’s Department of Physics, said: “Scanning the first laser beam in high resolution now opens up exciting ways for physicists to study a number of fundamental properties, including the hyperfine structure, unveiling isotopic changes in nuclear charge radius, shape, magnetic moment and spin. Scanning the second (ionising) step permits an extraction of the ionisation potential via the converging Rydberg series.”

Researchers from the Department of Physics (Dr Cheal and PhD student Calvin Wraith) participated in the experiments and Calvin visited GSI for several months for the vital preparatory work ahead of the accelerator beam time.

The paper is published in Nature and can be found at this weblink: