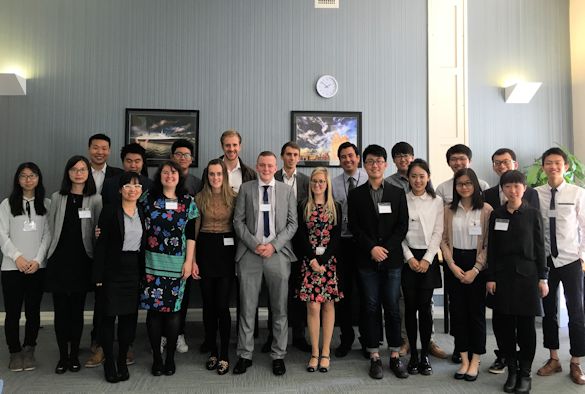 Students from the University’s Institute of Financial and Actuarial Mathematics (IFAM) joined forces with actuarial firm, Barnett Waddingham, to develop a risk analysis tool which will be put to use by the University.

The group of undergraduate and postgraduate students, under the supervision of IFAM academics, undertook a research project to understand the way in which the key risks facing the University can be quantified and modelled.

Following a talk from two Barnett Waddingham actuaries, Lauren Allan and Lewys Curteis, the students firstly identified the major risks faced by the University and then assessed the possible sources of data available to allow these risks to be quantified.

Tuition fees were identified as a financial risk as they provide a major source of income, and are subject to volatility.   One of the groups, under the supervision of IFAM’s Dr. Olivier Menoukeu-Pamen, assessed the effect of changes in the macroeconomic environment to fees.

Tuition fee income relates to the number of students studying at the University, so the group used a regression model to identify the macroeconomic factors that, historically, appeared to have the greatest effect on the number of students. This included GDPs, unemployment rates, inflation and exchange rates.

Using these macroeconomic factors, the group developed a model to forecast student numbers (and hence tuition fee income) under various scenarios, with particular focus on the impact that the Brexit decision could have on the University’s financial income.

Based on an historical analysis of the correlation between a university’s league table ranking and the factors contributing to the ranking, the group identified three factors that they considered to be the most significant in influencing a university’s ranking.

Using these factors, they developed a discrete-time Markov chain model to model how the University’s ranking might develop in future years, and identified the actions that the University could take to mitigate the risk of a fall in league table position.

The third group, under the supervision of IFAM’s Dr Apostolos Papaioannou, considered the impact of reputational risk. They compared the University’s actual tuition fee income to the total expected tuition fee income (based on a regression model).  They determined three reputational factors that could result in expected income being less than actual income, and calculated the amount of capital that the University could hold to mitigate the impact of these factors. The group then forecast how this capital value might develop in the future years using a Vasicek model.

Dr. Corina Constantinescu, Director of IFAM and coordinator of the project, said: “The students undertook this project as part of IFAM’s summer internship programme which gives students the opportunity to work on real world problems facing organisations.

“Given more time, the students would have liked to consider further risks faced by the University, the interdependencies between these risks, and possible ways in which the University could mitigate these risks. The projects showed the potential for universities and companies generally to quantify some of the risk they face.  This information can then be used to better understand and therefore manage the risks they face at an operational and strategic level.”