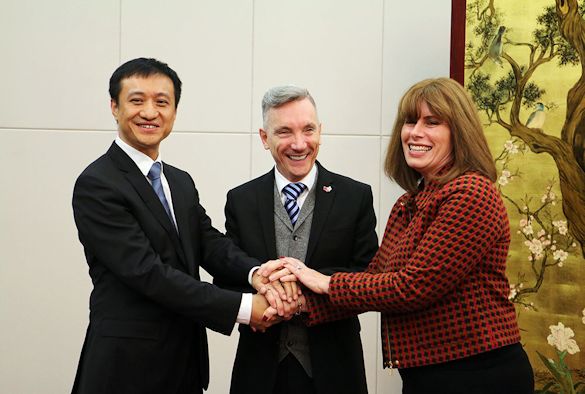 Sensor City, a joint venture between the University of Liverpool and Liverpool John Moores University, has struck a deal which could see a sister centre open in China and pave the way for a new fund to invest in UK businesses operating in the field.

Sensor City, one of four Government-sponsored University Enterprise Zones which is also supported by the European Regional Development Fund, has signed a Memorandum of Understanding (MoU) with the Tianjin-based Zhengxin Group.

The deal, which is expected to be ratified early next year, would see a Chinese Sensor City established in Tianjin, which is in North East China close to the capital Beijing.

It would also see an investment fund established by the Zhengxin Group to support early stage companies based at Sensor City, and help to support Chinese student entrepreneurs studying in Liverpool to develop their idea for new sensor-related technologies and companies.

The sister Sensor City in China would also provide hands-on support to UK companies wanting to do business in China.  The deal is a consequence of contacts made between Sensor City and the Zhengxin Group during the International Festival for Business 2016, which took place in Liverpool in June this year.

The global sensor market is currently worth some £400 billion and growing at over 10% each year. Sensors play an important role in day-to-day life with increasing use in industry, safety and security, and in personal gadgets and devices.

Sensor City Liverpool aims to create 300 start-up businesses and 1,000 jobs over the next decade, as well as foster industry-academic collaborations. It will include a Technology Development Zone, an Open Innovation Lab and offer coaching, business mentoring and access to funding.

Dr Joanne Phoenix, Head of Business Development at Sensor City, said the deal could lead to financial and practical support for early stage UK companies, including those wishing to explore China market opportunities.

She added: “The signing of the MoU is the first step in what we hope will be a long-term partnership that will significantly enhance our international standing, adding a unique dimension to the enterprise eco-system which we are creating.

“It will help put Liverpool on the map as a globally important research and enterprise centre for this exciting and rapidly developing technology.”

Liverpool Mayor Joe Anderson, who attended the signing ceremony in Tianjin, said: “This is a significant step towards the fulfilment of our vision to put Liverpool at the centre of the global sensor technology industry.

“It is also an example of the very real benefits we are seeing as a result of our long-term engagement with China and our investment in the International Festival for Business.”

Mr Zhihua Feng, Executive Vice President of Zhengxin Group, said: “The government’s approval for the joint project has ensured the two parties’ cooperation has moved to a new level. Tianjin has a good financial investment environment and policy support, and will provide a great help for Sensor City’s landing here.

“Tianjin is also the most important high-end manufacturing production base in northern China so offers opportunities for industry collaboration on a massive scale.”.

The signing of the MoU came during a two-week trade delegation to China organised by inward investment agency Invest Liverpool on behalf of the city region. Representatives from Sensor City and the Zhengxin Group signed the MoU at a ceremony in Tianjin.

Companies from the marketing, property and technology sectors, as well as representatives from academia and Chambers of Commerce, have been taking part in the visit, which is jointly led by Liverpool Mayor Joe Anderson and Wirral Council Leader Councillor Phil Davies.

Sensor City is supported by the UK Government’s Department of Business, Innovation and Skills (now Business, Energy and Industrial Strategy, BEIS) and through the European Regional Development Fund (ERDF), part of the European Structural and Investment Funds Growth Programme 2014-2020, who awarded £5 million in capital investment as match funding to support the development of the hi-tech sensor hub. 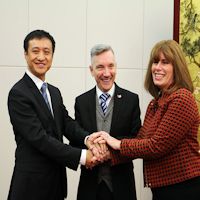