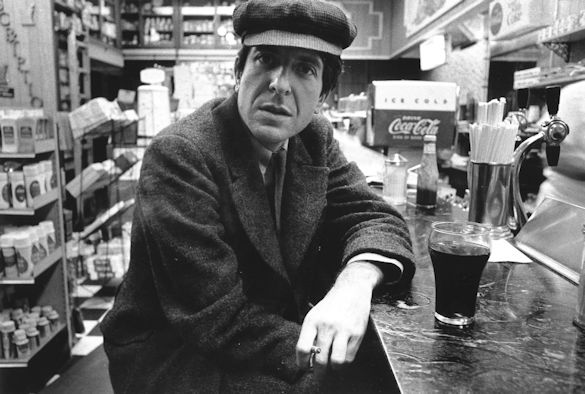 Dr Mike Jones is a Lecturer in the University of Liverpool’s Institute of Popular Music, part of the Department of Music.

“In 2010, was lucky enough to meet Leonard Cohen. Like many people, my introduction to his work came through the Judy Collins album In My Life, released in 1967.

This was a hugely-significant record because it featured the work of the then ‘unknown’ Leonard Cohen, Joni Mitchell and Randy Newman and had the effect of signalling the arrival of the ‘singer-songwriter’ era. So it was that on meeting him, I thanked Leonard ‘as much for Alexandra Leaving as for Dress-Rehearsal Rag’.

While, at first sight, this praise may seem a cryptic, he understood it full well because I was thanking him for maintaining an extraordinarily high standard of song-writing across a career that was, by then, entering its sixth decade.

To indicate that, in 1967, Leonard Cohen was an unknown singer-songwriter is to distort history – Cohen was a published poet and novelist before he turned to recording songs. When at last he did, he brought to song-writing not just a poetic sensibility, but a novelist’s eye, and it is perhaps this combination that sustained him through 50 years of writing and performing.

And what a performer! How an introspective and, to an extent, introverted man could delight a crowd at what, in recent years, had become arena concerts was completely remarkable. In 2013, I saw him enthral a huge crowd at the O2 Arena in London. Cohen was a physically small man and beginning to be diminished by age, and yet he commanded the huge space effortlessly; that he did and was able to with such ease speaks to the scale of his work and to the insight which informed it so richly.

There is a strong connection between Cohen’s work and that of the Spanish poet Federico Garcia Lorca. In its turn, Lorca’s work connects Spanish poetry to the earlier French symbolists (among them Verlaine and Baudelaire). Cohen’s turn to song-writing echoes Lorca’s deep interest in flamenco music (Cohen’s guitar tuition was primarily from a flamenco guitarist) but it also derives from Lorca’s own erasure of the boundary between poetry and song (at least three of Lorca’s collected works of poetry are identified as collections of songs). Alongside Lorca’s influence, Cohen was very much a poet of the ‘Beat Generation’ and here also music plays a role in the writing of poetry: Allen Ginsberg, the principal ‘beat’ poet, was influenced as much by the be-bop jazz of Charlie Parker as he was by the poetry of William Blake wherein we again encounter poems identified as ‘songs’.

The influence of Blake’s work on Cohen’s is also apparent and it is this powerful triumvirate – Blake, Lorca, Ginsberg – that Cohen mobilised and synergised into his own, distinctive, idiosyncratic and compelling song-writing.

Cohen’s ‘breakthrough’ song, in the voice of Judy Collins, was Suzanne. Suzanne is the ‘triumvirate’ in full effect: Blake’s use of metaphor to explore and celebrate, the Beat’s preoccupation with the universal in the personal, Lorca’s recognition of everyday life as an arena in which history is ever-active and in which eternal conflicts are played out, symbolically.

Collins’ success with Cohen’s work led to him signing a recording contract with CBS Records and to his first two ‘signature’ albums: Songs of Leonard Cohen and Songs From a Room. These are ‘signature’ because all of the elements that would define him as a singer-songwriter are here present – the limited vocal range, the limited guitar accompaniment – yet ‘limited’ is not to be read negatively, perhaps ‘focused’ is a more appropriate word, and ‘mesmerising’ a stronger, more appropriately metaphorical one.

Just as those vinyl albums would spin on their turntables, Cohen spun tales of a love that was always personally fragile yet always enduring as a human need and ideal. The pursuit of the contradiction of love as difficult to sustain but impossible to disregard carried Cohen through album after album, but this was not a ‘career’ in a conventional sense: Cohen went out of fashion along with almost all the other singer-songwriters as the harsher and less allusive genres of punk rock and dance music took hold from the late-1970s onwards.

In fighting to retain his ‘market share’ his record company insisted on a disastrous collaboration with the producer, Phil Spector. So unsettling was this experience that Cohen left the recording industry for a period, as he was to do again in the 1990s for, just as Lorca, Cohen was an individual whose self-searching walked an uneasy line between introspection and depression.

Just as Ginsberg, he turned to Buddhism to help him make sense of existence. In the first instance, it was the success of Famous Blue Raincoat by Jennifer Warnes – an album of covers and interpretations of Cohen’s song she had once sung as his backing singer – that restored him to public attention and he consolidated this with the ‘come back’ album, I’m Your Man in 1988. The accumulation of royalties then allowed him to spend time immersing himself in Buddhism which, in turn, saw him reside in a Buddhist monastery for a considerable period.

Ten New Songs was released in 2001. It is an extraordinary record but an almost novel-like plot twist forced him to take his songs, new and old, ‘on the road’. In the early 2000s, Cohen discovered that his manager had been dissipating his fortune over a considerable period. By the time of the discovery, his bank accounts had been virtually emptied.

The combined need to earn money and to sue his manager forced him into touring, but this was proved to be a glorious ‘Indian Summer’ for Cohen and for his audience which only his death has ended: from 2008 onwards Cohen toured extensively and generously (shows would last two hours and more) and released further albums, the most recent You Want it Darker only a few weeks ago.

In a year that has already witnessed the deaths of George Martin, Prince and David Bowie, Cohen’s is another one of note, between the four they helped create some of the truly great artefacts of popular music.”