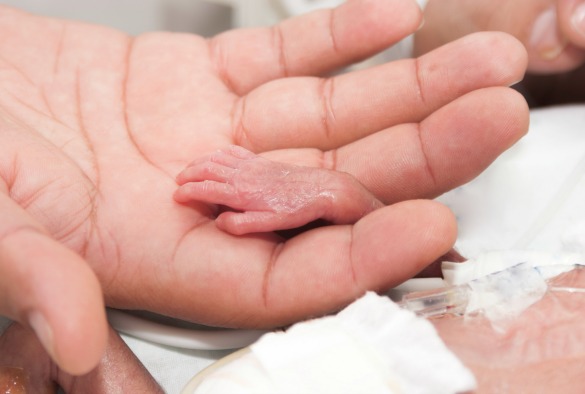 World Prematurity Day is an international awareness day for premature birth and all the issues surrounding it. 15 million babies are born too soon each year across the globe, that’s 29 babies every minute.  Sadly around one million of these babies will not survive.

Dr Angharad Care is a University of Liverpool Clinical Research Fellow based at the Harris-Wellbeing Preterm Birth Centre in the Liverpool Women’s Hospital a specialist maternity hospital that delivers more than 8,000 babies a year:

“This is the hardest question any doctor must put to a woman about to give birth to a tiny and extremely premature baby: do you want us to try to save your child? You gently explain the most depressing of statistics – that just one child in ten born at 23 weeks gestation goes home with only minimal disabilities, while three in ten will leave hospital facing a life blighted with profound mental and physical problems.

And the other six? Despite our very best efforts, they die. But what do approximate statistics mean to a mother who has felt the baby whose life we are discussing move inside her? She has rested her hand on her belly and imagined this child taking their first steps, starting school, perhaps even getting married.

Now she is being asked whether her son or daughter should be allowed to slip away quietly at birth, before the life she pictured for them has even had a chance to begin. Of course, she will want to believe that for her baby there will be a miracle – that her child will be that blessed one in ten. And that she must fight for them to be kept alive no matter what.

And so, with the odds stacked against them, the tiniest of babies are being resuscitated. Infants who, for reasons we are still trying to fathom, nature sent out into the world far too early to live without extreme medical intervention and support. Whether we should even be doing this, when outcomes are so poor and the distress caused to babies and families is often so acute, is a grey area of medical ethics.

The problem is that while we can get these infants breathing at birth, medicine’s ability to give them a good life in the longer term has yet to catch up. Until it does, this is where the phrase ‘where there’s life, there’s hope’ lets us down.

But if a parent says ‘yes, please do everything you can to save my baby’, then we must honour their wishes. If that baby is a reasonable weight and showing strong signs of life at birth, they do have a slim chance, so it is only right that we do. But once that desperate plea has been made and we have got the baby breathing, albeit via a machine, what next?

The very best outcome is that, after several months of aggressive treatment, they will go home and live a long and healthy life. These are the babies hailed as miracles – the children who prove that tiny infants really can be saved. But I repeat, that generally happens only 10 per cent of the time. For the rest, the future is much bleaker.

There is a great public misconception that prematurity simply means having a small baby. The reality can be far more distressing. For a start, 60 per cent die, some within hours. Sometimes, it quickly becomes apparent that the health problems they face are so profound that medics and parents alike question how much a baby should be put through simply to keep them alive.

The parents don’t want their child’s suffering prolonged when the problems that their baby faces are so clearly insurmountable. They agree that treatment should be withdrawn and their baby allowed to pass away quietly.

Equally tragically, with other babies, nature makes the decision for us: they succumb to infection or a bleed on the brain, or their immature vital organs fail them. They die no matter what we try. In the other 30 per cent of cases, parents take home a profoundly disabled child who is likely to need round-the-clock care.

In the years to come, their family relationships are tested to the limits; some lose their marriages and their jobs, as looking after a child who will never be independent of them takes its toll.

And that is before you consider the distress and discomfort their child may endure because of long-term health problems. As hard as this is for any parent to comprehend, it could even be that their quality of life is so poor, the decision to save them at birth is looked back on with regret.

So, why do parents ever set out on this path paved with heartache and despair? Are we doctors not clear enough in our explanations of what lies ahead? Believe me, we do our best. Often we have hours, at most, to prepare a woman for making the most agonising decision of her life. We talk about the neuro-developmental disabilities likely to affect her baby — cerebral palsy, epilepsy, mobility, sight, hearing and language problems.

But beyond statistics, there are no hard facts we can offer to help in that decision-making. People desperately want you to say ‘this will happen’, but with very premature babies we can only take it a day, or even an hour, at a time.

We try to explain that even if their child eventually goes home, they may never make it to school age. Extreme prematurity is the biggest killer of children under five.

Yet whatever we say is likely to fall on deaf ears.

A mother’s first instinct will be to protect her baby. And despite knowing better than most just how hopeless the outlook can be, I suspect I would feel just the same. I am not a mother, but I have been involved in this dreadful process countless times and seen at first hand the accuracy of those stark statistics.

I have the medical knowledge and access to the most up-to-date research and data that all suggest an extremely premature baby is unlikely to have a good outcome.

And yet, were I to find myself in that situation, I don’t know what my answer would be. A 10 per cent chance of everything turning out OK might well seem a risk worth taking. Premature birth is truly one of the most heart-breaking of all areas of medicine. I try to be dispassionate, but it’s hard. Particularly upsetting is the way a woman will almost always look to blame herself for going into labour so early in the first place.

She will ask ‘did I do too much exercise?’ or ‘did I let myself get too stressed?’. She may even berate herself for having gone on holiday — anything but accept that it was just one of those things that happens to some women and not others, and that no one will ever be able to pinpoint why she went into labour so early.

Add that sense of self-blame to having to make a life-or-death decision over her own child and it’s little wonder so many women urge us to try to save their babies. Of course, what we really need to do is find out why some women go into labour this early, so we can prevent them being put in this impossible position.

More research is needed on the causes of pre-term birth, so we can keep these babies in the very best place for them — their mother’s tummies. And, of course, for this we need funding.

In the meantime, some might say doctors are better placed than parents to make decisions about the resuscitation of their children. But it is not our job to judge. Our role is to counsel on the risks and likelihoods. If a mother says that the tiniest sliver of hope is enough for her, surely that has to be enough for everyone else involved, too.”

The Harris-Wellbeing Preterm Birth Centre at the Liverpool Women’s Hospital in partnership with the University of Liverpool, are in full support of raising awareness. The University of Liverpool’s Active Learning Laboratory, in the School of Engineering on Brownlow Hill, will be illuminated in purple to mark World Prematurity Day, tonight (Thursday 17 November 2016).

If you would like to donate please use one of the donation boxes at the Liverpool Women’s Hospital Main Reception or Fetal Medicine Unit on the day, or on-line at The Kitty – Raising money for Liverpool Women’s Charity, or Harris-Wellbeing Research Centre JustGiving Text HWWC15 £10/£5/£2 to 70070.

If you have experienced a preterm birth or would like to get involved in supporting the Harris- Wellbeing Centre’s activities please contact Tracey Ricketts, ricketts@liverpool.ac.uk for more information.

The original article, entitled ‘The most agonising dilemma any mother can face’, appeared in the Daily Mail’s femail MAGAZINE and can be found here.