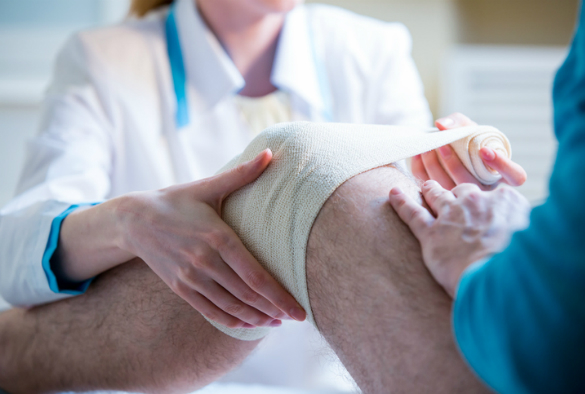 A ‘living bandage’ made from stem cells, which could revolutionise the treatment and prognosis of a common sporting knee injury, has been trialled in humans for the first time by scientists at the Universities of Liverpool and Bristol.

Meniscal tears are suffered by over one million people a year in the US and Europe alone and are particularly common in contact sports like football and rugby. 90% or more of tears occur in the white zone of meniscus which lacks a blood supply, making them difficult to repair. Many professional sports players opt to have the torn tissue removed altogether, risking osteoarthritis in later life.

The Cell Bandage has been developed by spin-out company Azellon, and is designed to enable the meniscal tear to repair itself by encouraging cell growth in the affected tissue.

A prototype version of the Cell Bandage was trialled in five patients, aged between 18 and 45, with white-zone meniscal tears. The trial received funding support from Innovate UK and the promising results have been published today in the journal Stem Cells Translational Medicine.

The procedure involved taking stem cells, harvested from the patient’s own bone marrow, which were then grown for two weeks before being seeded onto a membrane scaffold that helps to deliver the cells into the injured site. The manufactured Cell Bandage was then surgically implanted into the middle of the tear and the cartilage was sewn up around the bandage to keep it in place.

Professor Anthony Hollander, Chair of Stem Cell Biology at the University of Liverpool and Founder and Chief Scientific Officer of Azellon, said: “The Cell Bandage trial results are very encouraging and offer a potential alternative to surgical removal that will repair the damaged tissue and restore full knee function.

“We are currently developing an enhanced version of the Cell Bandage using donor stem cells, which will reduce the cost of the procedure and remove the need for two operations.”

The Cell Bandage was produced by the Advanced Therapies Unit at the NHS Blood & Transplant facility in Speke, Liverpool and implanted into patients at Southmead Hospital in Bristol, under the supervision of Professor Ashley Blom, Head of Orthopaedic Surgery at the University of Bristol.

Professor Blom commented: “The Cell Bandage offers an exciting potential new treatment option for surgeons that could particularly benefit younger patients and athletes by reducing the likelihood of early onset osteoarthritis after meniscectomy.”

A spokesperson for Innovate UK said: “Turning stem cell research into clinical and commercial reality requires close collaboration between businesses, universities, and Hospitals. It’s great to see this inter-disciplinary approach has led to such an exciting outcome from this first-in-human trial.” 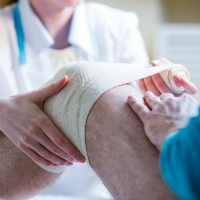