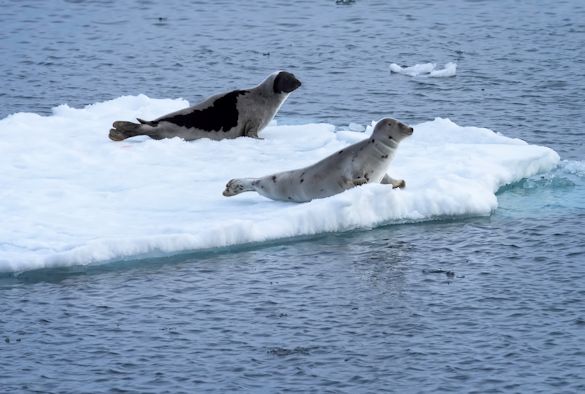 Scientists from the University’s School of Environmental Sciences are leading a £2.6M project to explore how the ecosystems in the Arctic Ocean are being altered by climate change.

Funded by the Natural and Environmental Research Council (NERC), ocean scientists and marine biologists will undertake a 3.5 year research project aiming to better understand how climate-driven changes to the Arctic will affect the productivity at the base of the food web and two Arctic seal species, the harp seal and ringed seal.

The Arctic Ocean is undergoing unprecedented rates of environmental change. The Arctic is warming fast than any other ocean region. Sea ice is declining by 10% per decade and causing open waer regions to expand.

The Arctic Ocean ecosystem is inextricably dependent on sea ice, with sea ice derived productivty being an important food source at the base of the food web and also providing a platform for Arctic seals to moult and reproduce.

Not only is Arctic sea ice declining but ocean circulation is changing, species from subpolar regions are migrating into the Arctic and riverine runoff is increasing. The project aims to shed improve our knowledge of the immediate and long term consequences of these rapid changes in the Arctic on the marine ecosystem which is currently poorly understood.

Liverpool Ocean Scientist, Dr Claire Mahaffey, who is leading the project said: “The big challenge is being able to detect if and how climate change is altering the marine ecosystem in the Arctic above the natural ecosystem variability.

“We propose to use stable isotope biomarkers, seal population ecology and mathematical models to develop a new framework to detect long term change in the Arctic ecosystem. We will also consider the impact of a changing Arctic on seal population dynamics and thus provide some insight into the management of future ecosystem services.

”The project will benefit from existing state-of-the-art instruments in the Liverpool Isotope Facility for Environmental Research (LIFER).

“We are also collaborating with 21 project partners from Norway, Canada, USA, Germany, Sweden and France who are experts in Arctic research. Our collaborators play a critical role in this ambitious pan-Arctic project, which will use satellites to map sea ice extent, productivity and ocean temperature, satellite tags to track Arctic seals, archived seal tissues collected to detect past changes in foodwebs and mathematical models to better understand the impact of the changing Arctic on the base of the food web.”

“Profound and fast-paced change in marine ecosystems in the Northern Hemisphere has implications for the UK and internationally. Today’s research into the impacts of stressors on Arctic marine ecosystems including diminishing sea ice, ocean acidification and pollutants will help scientists understand and predict future environmental change. It is vital to understand our changing Arctic Ocean, both to help manage environmental change globally and to inform appropriate decision-making around the use of our natural resources.” 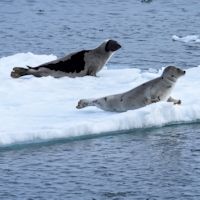