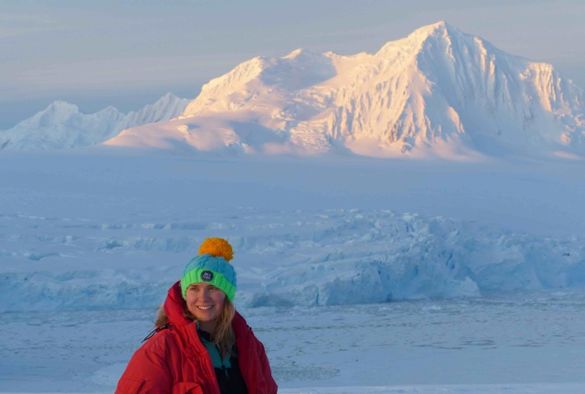 Madeleine Brasier is a PhD student in the University’s School of Environmental Sciences:

“Marine worms are some of the most abundant and diverse animals found on the Antarctic seafloor. They have many different ecological roles within marine communities making them an important part of ecosystem.

To date we still do not fully understand how diverse our oceans are, especially regions such as the deep Antarctic seafloor, which require research expeditions on ships such as the James Clark Ross to collect marine animals. Given the current and future environmental changes predicted in Antarctica, it is vital that we understand its biology if we want to monitor and manage any potential impacts.

My PhD aims to to reexamine the current levels of species diversity in Antarctic marine worms, describe their geographic distribution and determine their position within the Antarctic food web. To do this I have been using a combination of genetics, modelling and stable isotope analysis techniques. Whilst I am student at the University of Liverpool, my research project is joint with the Natural History Museum, London and the National Oceanography Centre, Southampton.

How do we collect Antarctic worms?

My marine worms, or ‘polychaetes’ which is Latin for ‘many bristles’. were collected on British Antarctic Survey led research expeditions to three different regions of Antarctica. In total about 20,00 polychaetes were collected amounting to ~400 species based on their morphological characters.

The equipment, including nets and sledges, used to collect these worms and other animals is deployed from the ship, lowered to the seafloor which could be between 500 to 1500 m deep, where they are towed and slowly recovered. Once on deck we sort our samples, then carefully photograph and preserve our specimens before their journey back to our laboratories in the UK.

How do we study them?

Using DNA I discovered the several of these species contained ‘cryptic species’ which are morphologically identical but genetically distinct. After sequencing nearly 500 individuals from about 15 species, we found that by using DNA species diversity increased by 233%.

Using a combination of species records, genetic data and particle tracking analyses we have observed that many of these small polychaete species are widespread throughout the western Antarctic or even circumpolar.  Understanding how species are distributed and connected is vital for marine management. In order to effectively protect marine regions, we need to be confident that the areas we are protecting contain a variety of marine species in abundance and are able to supply larvae or adults to neighboring regions.

The final stage of my PhD uses stable isotopes to determine the trophic level of Antarctic polychaetes, i.e. where they are in the food web. At the moment the relationship between species and functional diversity is not fully understood.

Most of our understanding of the feeding characteristics of these polychaetes is based on their morphology or related species from other oceans. Determining a comparable numerical trophic level we can examine the variation between and within cryptic species, Antarctic regions and depth ranges. Knowing whether species diversity relates to functional diversity will help us understand the impact of species loss on marine communities within the Antarctic Ocean.

I feel very lucky to have visited Antarctica twice during my PhD, in March 2016 I took part in a British Antarctic Survey expedition to the South Orkney Islands, just north of the Antarctic Peninsula. Here we sampled a marine protected area, collecting many species considered to be new to science and found many interactive relationships between several marine species.

I have recently obtained funding from Antarctic Science to study the functional relationship between deep-sea corals and symbiotic marine worms collected during the expedition.  Last summer I also attended the US Antarctic program’s early career-training course in Antarctic Biology at Palmer Station on the Antarctic Peninsula. Here I experienced what it was like to live and work on an Antarctic station and all the considerations, precautions and enjoyment involved in planning and conducting Antarctic research.

I will be submitting my thesis next year, after which I wish to continue my career in polar science, to improve our understanding of and help protect our oceans.