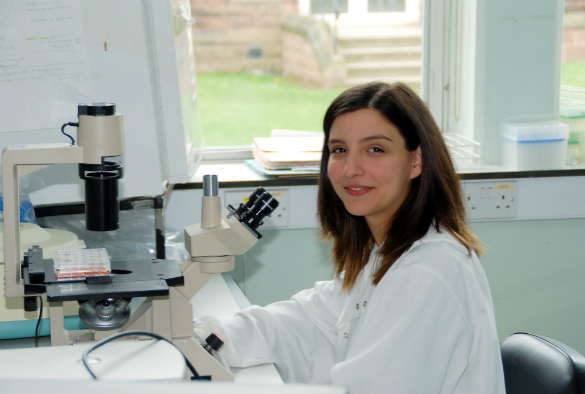 Maria Afonso is a final year PhD student at the University’s Institute of Infection and Global Health.

I have always been interested in science and research. By the third year of my veterinary degree I was helping one of my lecturers with his research projects and knew, there and then, that I wanted to do a PhD once I graduated.

I moved to Liverpool from Portugal in 2013 to begin a 4-year PhD project, funded by MSD Animal Health, looking at respiratory infections in dogs and cats.

Even though I am still not a fan of the British weather (it is hard when you are Portuguese), adapting to the UK wasn’t hard. There have been ups and downs, like with all PhDs, but I enjoy being a part of the University of Liverpool community and have made many friends for life.

Respiratory infections in dogs and cats

I have now been a PhD student for almost 4 years and am months away from submitting my thesis. During my doctoral studies, under the main supervision of Dr Alan Radford and Dr Gina Pinchbeck, I have been trying to understand which bacteria and viruses more commonly cause respiratory disease in cats and dogs, and which factors, may be involved in increasing or decreasing the likelihood of an animal getting ill. Understanding this will help scientists and vets use the best possible strategies for disease prevention. This is especially important in cases where animals are housed in groups like rescue shelters or breeding catteries where disease epidemics can develop and spread very quickly.

One of the viruses that I have focused on is called Feline calicivirus. Curiously, this bug is somewhat like one of the main viruses that causes gastroenteritis in humans (norovirus) and, in the past, has been used as a model to study this disease as it can be easily grown in a lab (whereas Human norovirus does not grow in vitro). Feline calicivirus or FCV is one of the main causes of cat flu. Its symptoms can range from mild like sneezing and mouth ulcers to very severe disease affecting several organs. One of the reasons this happens is because the virus is genetically, highly diverse and, for us scientists, that makes it very interesting to study. For over one year, I and the team I work with at the Leahurst campus, collected and analysed over 1500 mouth swabs taken from healthy and sick cats all around Europe and found that around 9% of cats going into veterinary practices are infected with FCV. We have also studied the diversity of this virus across 6 European countries (UK, France, the Netherlands, Germany, Italy and Sweden) and how they react with certain vaccine antibodies. We have found that, in laboratory conditions, the virus still cross-reacts with antibodies (gets “killed”) stimulated by using a vaccine virus that has existed for over three decades. This is curious because feline calicivirus evolves very quickly which makes us think that this evolution may be somewhat special and different to other viruses, something that we would like to study in the future.

During my time as a postgraduate student in Liverpool, I have had the chance to present at several international conferences and workshops (in places like Montpellier, in France and Trinidad and Tobago, in the Caribbean) and was an invited speaker in key opinion leader meeting in the UK and Scandinavia. I have also been very lucky that my supervisors offered me the amazing opportunity to be a co-author in book chapters of technical veterinary manuals like the 8th edition of the Textbook of Internal Veterinary Medicine (something that, as a vet student, I regarded as the “Bible” of internal medicine) which has just been published. Other activities I have been involved in include some teaching of undergraduate students and, last year, I was part of a winning team at the entrepreneurship competition Biotechnology YES which taught me a lot about running businesses and knowledge transfer between academia and industry.

More recently, for about three months in late 2016, I worked for the Institute of Infection and Global Health as their Science Communication and Public Engagement Officer. This was an amazing experience of working in a fast-paced environment and it gave me a renewed appreciation for the effort put in by all the members of the professional services team at the Institute. It also led me to apply for a public engagement grant from the University’s Faculty of Health and Life Sciences which I will be using, in coming months, to develop a science-art project that aims to explain infectious diseases and microbiology to people from non-scientific backgrounds by using zines (self-made magazines). The most important thing about science is that it can only serve its purpose if it’s properly communicated to everyone – and that is one of the greatest lessons I have learnt as a PhD student.