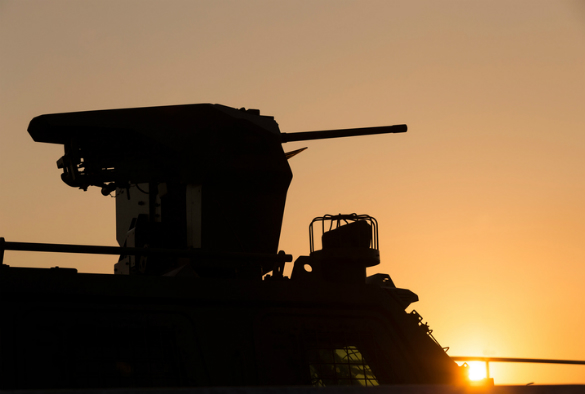 Dr Ulrich Petersohn is a Senior Lecturer in International Politics.

Western governments find themselves in a dilemma in their fight against the so-called Islamic State (IS). The organisation has proved remarkably resilient to military force, which so far has depended heavily on air strikes. Ground troops from outside the region are not forthcoming and while a sizeable local ground force is fighting IS in Iraq, its troops are unlikely to venture into Syrian territory.

This puts Western governments in a bind. Destroying IS is a top priority, but the prospect of “putting boots on the ground” is as unpopular as ever with citizens weary of messy foreign intervention. A few in the private security industry have seen this as an opportunity to ply their trade. Most prominently, Erik Prince, former CEO of US security company Blackwater (now Academi), has promoted the idea of sending in private military and security companies (PMSCs) as a ground force.

This is hardly a left-field idea. PMSCs have lately been taking over combat roles in various places. A Russian PMSC reportedly operates tanks and artillery in support of the Russian-Syrian military operation; in Nigeria, military specialists from South Africa support the government’s fight against Boko Haram, and the United Arab Emirates has recruited foreign fighters for its operations in Yemen.

It wouldn’t be all that surprising for Western governments to seriously consider turning to private-hire forces for help against IS – but if they did, they’d have to weigh up some very high stakes. Not only would the usual legal and moral barriers have to be addressed, but serious political capital would have to be put on the line.

This would only make sense if these firms can all but guarantee an effective solution. So what are the odds that they can?

Civil conflicts and insurgencies generally end either with negotiated settlements or decisive victories of one side. The latter is far more frequent than the former. Most often the situation is what’s called a mutually hurting stalemate, a situation where neither side can defeat the other but both keep on fighting. In these situations, external interventions can tip the balance and end the war. This also applies to intervention by PMSCs. Statistical evidence provides some support for their effectiveness.

At a glance, then, the equation seems simple enough: having a PMSC join a combat mission shortens a civil war while making it more deadly. But this conclusion is based on statistical averages, which by definition include not just successes but also failures – cases where PMSCs failed to shorten a conflict, or even prolonged it. It pays, then, to try and identify what conditions might predict success.

Probably the best-known private security success story comes from Sierra Leone. In the mid-1990s, the Sierra Leonean government asked Executive Outcomes, a now-defunct South African PMSC, to help stop a superior rebel force from encroaching on the capital, Freetown. At short notice, Executive Outcomes deployed a small but highly capable force. Due to the atrocities the rebel forces committed, the company quickly gained the support of the local population, and in combination with its superior military skills forced them to the negotiating table within six months. The negotiated peace did not last long (the war ended in 2002), but the operation is to this day considered an impressive one.

An encouraging precedent for PSMCs and their advocates, then, but the conditions on the ground in Iraq and/or Syria are very different indeed.

The environment of this conflict, for one, is very different. In Sierra Leone it was clear who fought against whom, and on whose behalf Executive Outcomes was operating, but the situation in Iraq and Syria is much less straightforward. Multiple regional and world powers are involved in the conflict, and they disagree on whom to support. In addition, even if a consensus could be reached, alliances between conflict parties constantly shift in this war zone.

Then there’s the matter of the opponents’ military capabilities. The rebel force Executive Outcomes faced in Sierra Leone was disorganised and poorly trained; IS, on the other hand, commands remarkable military experience, resources, and strategic prowess. Undoubtedly, highly qualified PMSC operators would be able to take on the force, yet a quick victory would be impossible.

The relationship to the local population is also key for success. In the Sierra Leone conflict, the forces that were brutalising the local population were mostly foreign rebels, meaning Executive Outcomes could win Sierra Leoneans over by providing not just security, but even basic medical services. But while many people living under IS’s rule have to live under often brutal practices, IS have introduced a degree of order and even some healthcare services. A private company would have more difficulties in gaining support.

The Iraqi population, for one, sees PMSCs as brutal, aggressive and disrespectful. They still remember the infamous 2007 Nisour Square massacre in which Blackwater operatives opened fire and killed 17 Iraqi civilians. This history isn’t evidence that incidents involving PSMCs are in themselves deadlier than those involving regular military forces, but as far as winning over the population goes, reputation is what matters. Without the support of the locals, a company stands little chance of isolating IS supporters and winning a decisive military victory.

So while PMSCs have the potential to shift the balance in a civil war and to decisively end it, their chances depend on a relatively clear division between friend and foe, a weak opponent, and a positive relationship to the local population. In more complex conflict situations, with shifting alliances, lethally competent opponents and unsupportive populations, they aren’t much of an alternative. Any suggestion that they could help finish off IS should be treated with scepticism.