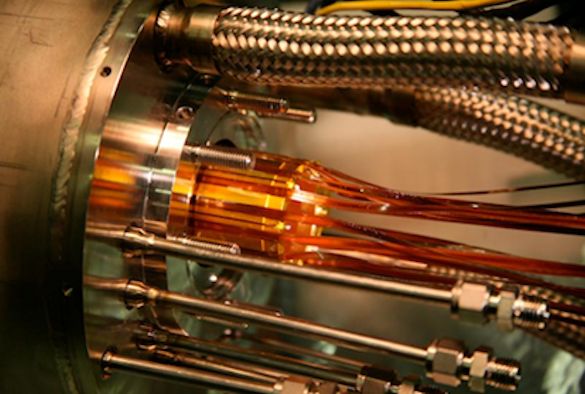 Image: Inside the ALPHA apparatus courtesy of the ALPHA experiment.

The ALPHA collaboration, which the University is a partner in, has been awarded a new four-year research grant from the Engineering & Physical Sciences Research Council (EPSRC) worth almost £5 million.

The ALPHA collaboration covers 14 institutes worldwide and over 50 people. The UK collaboration involves the University of Liverpool, as well as Manchester and Swansea Universities.

ALPHA carries out its experiments at CERN and has been very successful in its studies of antihydrogen over recent years with seven papers in Nature Journals and four in Physical Review Letters. Amongst those was the first observation of the 1S to 2S transition in antihydrogen.

Professor Paul Nolan, who leads the Liverpool ALPHA group, said: “This new grant will allow more data to be collected to improve the precision of our experiments and to measure the line width of the transition. This will allow a very accurate comparison with the properties of the same transition in hydrogen and hence a direct comparison between matter and antimatter.”

Liverpool is responsible for the silicon vertex detector that plays a vital role in ALPHA to determine when antihydrogen has been formed within the apparatus. This detection system was constructed in the Liverpool Semiconductor Detector Centre and mechanical workshop.

The detector and its electronic readout system was designed and is maintained by the highly experienced staff in the nuclear physics research cluster. The new EPSRC grant provides around £840,000 for research by the Liverpool ALPHA group.

The Head of the Physics Department, Professor Carsten Welsch, who is also a co-investigator on the new grant added: “We are absolutely delighted about this excellent news. The EPSRC funding provides important support for ALPHA and will allow us to continue to address some of the most fundamental questions in physics. “

The Liverpool effort at CERN and the data analysis part of the project are the responsibility of Dr Petteri Pusa and research student Mostafa Ahmadi.

Antimatter research is a very important element of R&D in the physics department. In addition to its involvement in ALPHA, Liverpool also has a lead role in the European network AVA.