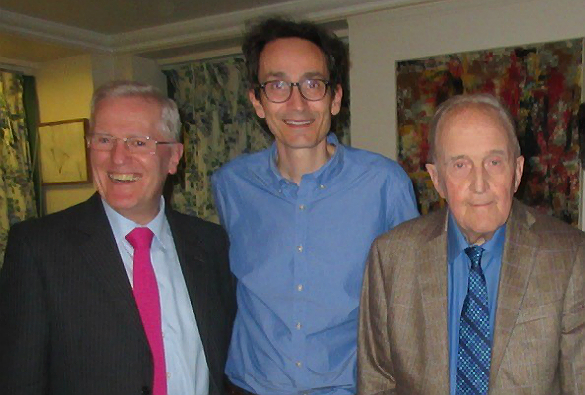 The annual lecture is organised by the University of Oxford’s Medical Alumni Association in honour of Professor Sir David Weatherall, FRS, Emeritus Regius Professor of Medicine in Oxford. Solomon, who was one of Weatherall’s last house officers in 1990, spoke about the global threat of emerging brain infections. He described the work he started on Japanese encephalitis in Southeast Asia twenty-five years ago, and showed how the approaches he learnt then are now being applied to newer emerging infections such as Zika. Solomon is Director of the National Institute for Health Research Health Protection Research Unit in Emerging and Zoonotic Infections which has been at the forefront of the UK research response to Zika, Ebola and other recent threats.

Solomon also reflected on how Weatherall had influenced him and a whole generation of clinical researchers, and recalled some of the patients he had cared for under Weatherall. This included world-famous author Roald Dahl, about whom Solomon has recently written a book.

Dr Stephen Goss, who introduced the lecture, had been Solomon’s Tutor in Medicine at Wadham College. He recalled Solomon’s admissions interview and their subsequent weekly tutorials, and he expressed his particular delight – and complete lack of surprise – that Solomon should now be invited back as a distinguished guest lecturer.

Afterwards Professor Weatherall, who is now in his 80s, commended Solomon for the progress made, but also highlighted the challenges ahead in working on emerging infections, and other imported diseases in tropical settings, such as the thalassaemia blood disorders.