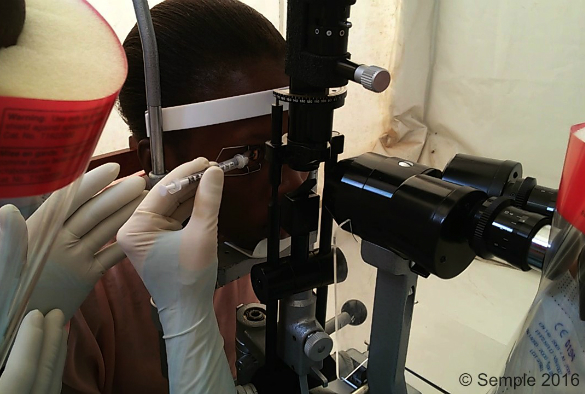 Researchers from the University’s Institute of Translational Medicine have conducted a study of Ebola survivors to determine if the virus has any specific effects on the back on the eye using an ultra widefield retinal camera.

To find out more about the broad-ranging symptoms of Post Ebola Syndrome (PES), a clinical research team led by Dr Janet Scott and Dr Calum Semple assessed survivors in collaboration with staff at the 34th Regiment Military Hospital in Freetown, Sierra Leone.

Two years on from the Ebola outbreak in West Africa, and many Ebola survivors are still presenting with symptoms of post-Ebola syndrome (PES), including joint and muscle pains, psychiatric, neurological and eye problems.

Viruses, like Ebola, can stay hidden in our bodies by exploiting a vulnerability in our immune systems. This vulnerability is called “immune privilege,” and comes from an old observation that foreign tissue transplanted into certain parts of the body don’t elicit the usual immune response. This includes the brain, spinal cord, and eyes. Scientists believe this is because the brain, spinal cord, and eyes are simply too delicate and important to withstand the inflammation that’s typical of an immune response to infection. 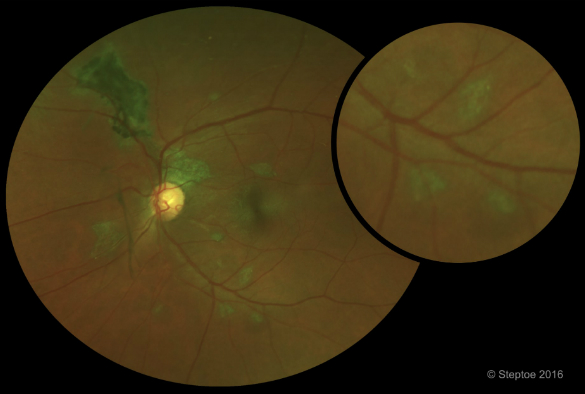 The results of this research, which are published in the Emerging Infectious Diseases journal, show that around 15% of Ebola survivors examined have a retinal scar that appears specific to the disease.

Dr Steptoe, said: “The distribution of these retinal scars or lesions provides the first observational evidence that the virus enters the eye via the optic nerve to reach the retina in a similar way to West Nile Virus. Luckily, the scars appear to spare the central part of the eye so vision is preserved.  Follow up studies are ongoing to assess for any potential recurrence of Ebola eye disease.