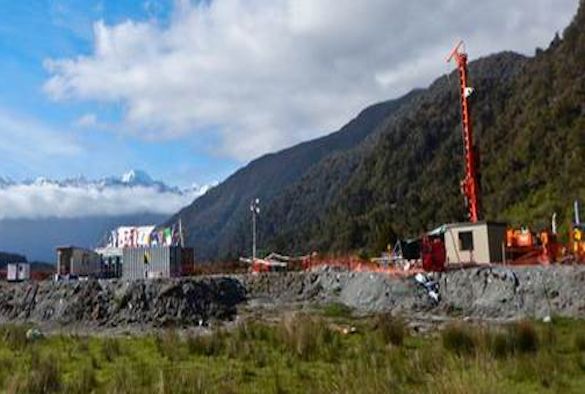 Liverpool scientists are part of an international collaboration who have discovered surprisingly high temperatures and the potential for large geothermal resources when drilling nearly 900 metres into the Southern Alps of New Zealand’s South Island.

The scientists were part of the Deep Fault Drilling Project which was carried out in 2014 in Westland, north of Franz Josef Glacier on New Zealand’s South Island. The site was drilled by a team of more than 100 scientists from 12 countries, who were working to understand how earthquakes occur on geological faults.

The team identified the Whataroa site as the best place in the world to understand what a fault looks, feels, and sounds like just before an earthquake occurs. The Alpine Fault is known to rupture in magnitude 8 earthquakes approximately every 300 years, plus or minus 90 years.

The results of the project, published in the journal Nature, discuss the site’s geothermal gradient—a measure of how fast the temperature increases going deeper beneath the Earth’s surface. They discovered water at 630 metres depth that was hot enough to boil at the surface. Similar geothermal temperatures are normally found at depths greater than three kilometres.

The study finds that the geothermal conditions discovered are extreme by global standards and comparable to those in major volcanic centres like Taupo—but there are no volcanoes in Westland.

Scientists from the University’s School of Environmental Sciences took part in the drilling operations which led to the exciting result on how the fault affects hydrothermal fluid flow.

Professor Dan Faulkner said: “The unusually high fluid temperatures measured are important for two primary reasons; first hydrothermal fluids have a profound effect on fault strength and influence the earthquake process and, second, the high water temperatures could be exploited as a source of geothermal energy in the area.

Dr Betty Mariani, Liverpool Lecturer in Geology who was also part of the project, added: “We have many more exciting results to come from the Liverpool team that is still working on rock core from the drilling project”.

Professor Rupert Sutherland, from Victoria University of Wellington who led the project, said: “The geothermal environment is created by a combination of tectonic movement and groundwater flow. Slippage during earthquakes has uplifted hot rocks from about 30 kilometres deep, and the rocks are coming up so fast that they don’t get a chance to cool properly.

“Earthquakes fracture the rocks so extensively that water is able to infiltrate deep beneath the mountains and heat becomes concentrated in upwelling geothermal fluids beneath valleys. River gravels that are flushed by abundant West Coast rain and snow dilute this geothermal activity before it reaches the surface.

“Nobody on our team, or any of the scientists who reviewed our plans, predicted that it would be so hot down there. This geothermal activity may sound alarming but it is a wonderful scientific finding that could be commercially very significant for New Zealand.”

The discovery could transform the economy and resilience of Westland, and provide a significant and sustainable clean energy resource that could be developed using local people and equipment, according to Warren Gilbertson, Chief Operating Officer of Development West Coast.

Novel technologies were used to gather the data, including precise temperature and seismic measurements that were made using lasers and a fibre-optic cable installed in the borehole.

Overall, the Deep Fault Drilling Project fell short of achieving all of its technical goals as the fractured and strongly-layered rocks and extremely hot temperatures provided engineering challenges.  However, many scientific measurements were made and the borehole continues to provide interesting data.

The Deep Fault Drilling Project is an international science project jointly led by Victoria University of Wellington, GNS Science and the University of Otago but also involving researchers and students from more than a dozen organisations in New Zealand, Canada, France, Germany, Japan, the United Kingdom, and the United States.

DFDP’s two principal funding bodies are the Marsden Fund of the Royal Society of New Zealand and the International Continental Scientific Drilling Program with additional funds for specific components of research being provided by the Earthquake Commission, the National Science Foundation (United States), the National Environmental Research Council (United Kingdom) and participating organisations.

The paper `Extreme hydrothermal conditions at an active plate-bounding fault’ (DOI:10.1038/nature22355) is published in Nature.