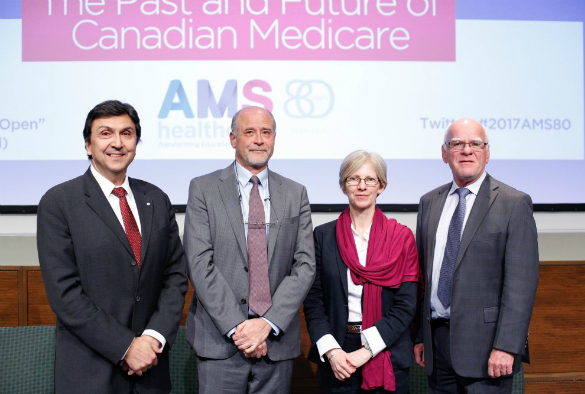 Professor Sally Sheard, the Andrew Geddes and John Rankin professor of modern history at the University of Liverpool, gave the keynote address at the Associated Medical Services (AMS) conference in Toronto, Canada, on 11 May.

Speaking to an international audience of health policymakers and Canadian politicians, Professor Sheard drew on her research into trends in UK and Canadian waiting times for medical treatment to demonstrate the critical application of history to health policy. The event was part of a two day celebration for the 80th anniversary of the AMS – one of Canada’s oldest and most influential healthcare think tanks, which originally began as a health insurance company. After the foundation of Medicare in the 1960s – which was partially inspired by the UK’s NHS as a publicly funded healthcare system – it was transformed into a charity, supporting leadership development and advancing research into both the humanities and health.

Professor Sheard said: ‘I was delighted and honoured to be asked to give the keynote address at this event. Bringing historians into contact with policymakers is vital for informing the development of evidence-based healthcare. With representatives from Australia, France, Israel, the US and UK, as well as senior Canadian health policymakers, we had a very enjoyable and productive two day meeting.