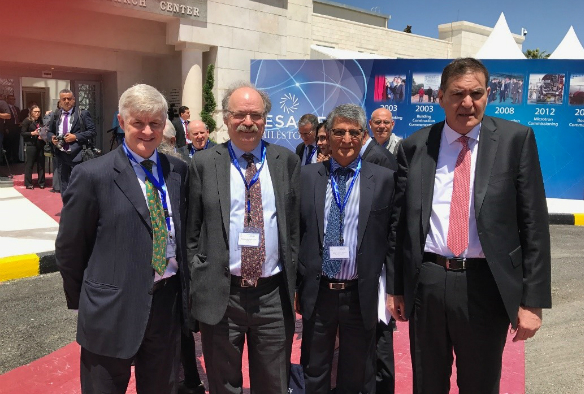 Professor Samar Hasnain recently attended the official opening of the Synchrotron-light for Experimental Science and Applications in the Middle East (SESAME) research centre in Jordan.

An intergovernmental organisation, SESAME is the first regional laboratory for the Middle East and neighbouring regions and ushers in a new era of research covering fields ranging from medicine and biology, through materials science, physics and chemistry to healthcare, the environment, agriculture and archaeology.

Professor Hasnain, Max Perutz Professor of Molecular Biophysics at the University’s Institute of Integrative Biology, has been the HM Government’s representative on the SESAME Council since 2000. He was also the founding Chair of the Beamline Advisory Committee and is the founding Chair of the newly formed Peer Review Committee, which is responsible for approving experimental projects.

Professor Hasnain said: “This dream project was initiated in 1997 with a visionary approach by Herwig Schopper, former Director General of CERN. Despite many hurdles and difficulties, a modern synchrotron laboratory has been created for scientists of nations that are not at peace with each other. The UK can be proud of playing its part in training technical and scientific manpower as well as making in-kind contributions and providing technical and scientific advice”.

Professor Khaled Toukan the Director of SESAME, said: “In building SESAME we had to overcome major financial, technological and political challenges, but – with the help and encouragement of many supporters in Jordan and around the world – the staff, the Directors and the Council did a superb job. Today we are at the end of the beginning. Many challenges lie ahead – including building up the user community, and constructing additional beamlines and supporting facilities”.

Professor Hasnain added: “The UK will continue to play its part in ensuring that this creative facility continues to develop and produce high-quality science that it promises. With its proud history of global cooperation and strong science base, the UK is well placed to strengthen its partnership in years to come through joint science programmes of local and global importance”.