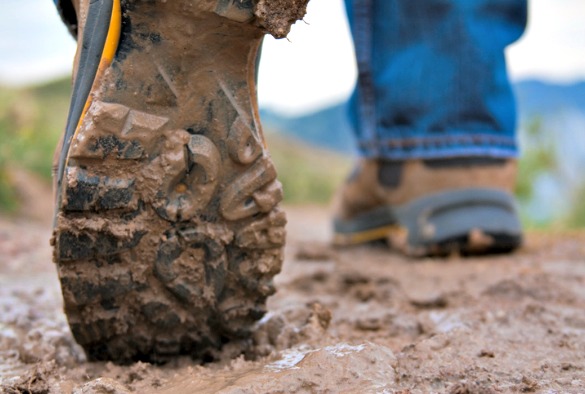 A team of UK based researchers, known as the ENIGMA Project, has developed a novel method for assessing human/pathogen interactions in the natural environment, using citizen scientists wearing boot socks over their shoes during walks in the countryside.

The ENIGMA project is a large collaborative programme of research taking place across the UK led by Professor Sarah O’Brien from the University of Liverpool’s Institute of Psychology, Health and Society.

The most common bacterial cause of diarrhoeal disease in the developed world is Campylobacter. There were approximately 700,000 cases in the UK in 2010 with around 200 deaths. The current annual UK cost of acute Campylobacter infection is around £600 million, exceeding that from Salmonella, Listeria and E. coli O157 combined.

Campylobacter in people is very seasonal. Disease increases sharply in late spring, reaching a peak in early summer. However, this varies in different areas of the country. In North West England the seasonal peak is very pronounced, but is less so in East Anglia. To investigate this marked difference the researchers looked for Campylobacter in the environment in various rural settings to see whether or not the landscape is a direct source of human exposure to Campylobacter.

Once every three weeks for 16 months, and more frequently in the springtime, a group of 60 volunteers put a sock on the outside of one shoe and went for 2.5-mile walks in two regions of the UK, the livestock-dominated North West, and East Anglia, much of which is devoted to cropland.

Then, wearing gloves, the walkers peeled the socks off their feet, placed the dirty garments in biohazard bags and mailed the socks to laboratories run by Public Health England and the University of Liverpool.

Almost half of the socks examined tested positive for Campylobacter.

These socks were crucial components in the first outdoor survey of its kind — an attempt to gauge the wild population of campylobacter microbes using the feet of citizen scientists. The results of the study have been published in the journal Applied and Environmental Microbiology.

As measured on boot socks, Campylobacter was more prevalent in livestock-dominated North West than in East Anglia (55.8% of socks, vs 38.6%). Campylobacter peaked during winter in both regions, and peaked again in spring in North West. Precipitation was associated with greater Campylobacter, and higher temperatures with less.

According to the report the results are consistent with our understanding of Campylobacter survival and the probability of material adhering to boot socks.

C. jejuni was the most commonly found species, with C. coli largely restricted to the livestock dominated North West, according to the report. Source attribution analysis suggested that the major source of C. jejuni was sheep in North West, and wild birds in East Anglia.

Professor Sarah O’Brien, said: “The transmission pathways for 50% of human cases of Campylobacter are unknown.  Around 40% of cases occur during the ‘spring peak’. Yet the relative roles of environmental and food pathways, and their interaction, in this seasonal emergence are poorly understood, if at all.

“Generally, food is often a source of Campylobacter in humans but food alone cannot explain all the cases occurring in the population. This study has helped us examine other potential causes of how the disease is contracted.

“Ultimately, this research could lead to interventions to reduce the disease risk to humans.”

The full paper, entitled ‘A novel sampling method for assessing human-pathogen interactions in the natural environment using boot socks and citizen scientists, with an application to the seasonality of Campylobacter’, can be found here.