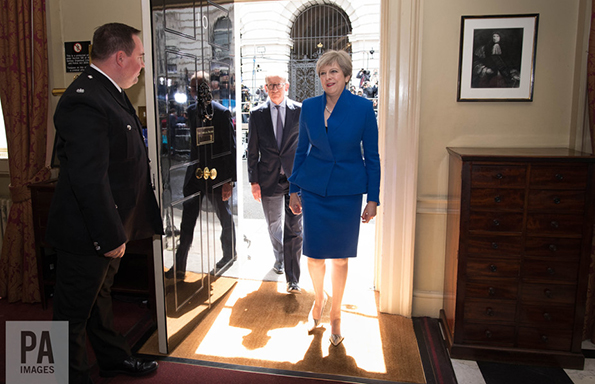 Theresa May’s snap election wager has backfired. The supposed “Brexit election” was intended to signal the public’s support for the prime minister’s approach to the UK’s departure from the European Union. Instead, it has left her incredibly weak, without even a majority in government and her future as leader uncertain. And the economic data reflects this.

Markets hate uncertainty. One measure that tracks this is the UK’s index of Economic Policy Uncertainty, which shows diminishing confidence around the country’s economic resilience. It is calculated by tracking daily articles relating to economic and political unrest in more than 650 newspapers in the UK. The higher the number, the more turbulent the economic outlook. The index surged from 286 on May 18, 2017 to a staggering peak of 521 on June 8 2017, the day of the general election.

This is significant because higher levels of uncertainty are associated with greater stock price volatility and reduced investment and employment in key areas of the economy like healthcare and infrastructure.

The UK’s rising uncertainty levels stretch back to its EU referendum on June 23, 2016. Since then, GDP growth increased by only 0.84% while inflation rose by 1.09%. Uncertainty around the UK’s future relationship with the EU and the Brexit negotiations has caused sharp movements in currency markets as a result of investors hedging their bets and speculating on trades. The day after the referendum, the euro to sterling exchange rate fell by a massive 6.2% overnight, while economic policy uncertainty hit a record value of 2,661. It fell a further 5.1% from June 2016 to May 2017 and 3.42% during the month of May 2017, alone.

The next graph shows the daily linkages between the euro to sterling exchange rate changes and economic policy uncertainty since May triggered Article 50 on March 29, 2017. A negative value implies that as the uncertainty index increases, the sterling to euro exchange rate tends to fall.

Amid the result of a hung parliament, the euro to sterling exchange rate changed from €1.154/£1 on June 8 (the day of the election) to €1.139/£1 on June 9, 2017 (when the result became clear); an overnight plummet of over 1.25%. When comparing this change with June 24, 2016, the fall does not seem too severe, but the key issue is whether sterling will continue to depreciate against the euro.

The chart below shows the actual euro to sterling exchange rate changes from May 18, 2017 to June 9, 2017 and forecast ranges for the next few days. Although these forecasts suggest the possibility that sterling could bounce back, the lower bound implies that by June 14, sterling could be as much as 2.3% lower – relative to the euro – than the day before. The fact that sterling has been falling – reaching a low of €1.131/£1 just before midday – since markets opened on June 12, suggests that it is going in one direction. Down.

Brexiteers argue that export-led businesses in the UK will benefit from a favourable exchange rate. Indeed, the UK exports 44% of its goods and services to the euro area and with persistent depreciations in sterling relative to the euro, this makes UK exports more competitive.

This is all well and good while the UK is still a member of the single market. In the longer-term, the absence of free trade, coupled with the possibility of a sour deal, points toward the imposition of tariffs on UK exports. In turn, euro area nations may be encouraged to (freely) trade with remaining EU member states for comparable goods and services; a threat that businesses regard a risk at a three year horizon.

A lack of credibility

So the markets are clearly unconvinced of the prime minister’s message of strength and stability. The next graph shows the daily exchange rate volatility between the euro and sterling over the election campaign period. The daily volatility of exchange rate changes on June 9, the day after the election, was 0.35%, a staggering 0.2 percentage points higher than a month earlier. It shows the markets are worried.

This rising exchange rate volatility also hurts export-led firms. It results in them acting cautiously, as their future earnings and investments remain exposed to the risk of exchange rate fluctuations.

The implication here is that currency markets do not feel the government’s current position for Brexit negotiations is strong. This, coupled with May’s lack of support in the general election, should put her leadership into question, particularly when it comes to entering divorce talks with the EU. The very fact that the domestic political landscape of the UK is shrouded by yet another layer of uncertainty suggests that economic policy, the exchange rate, and indeed the wider economy, is in for a rough ride.