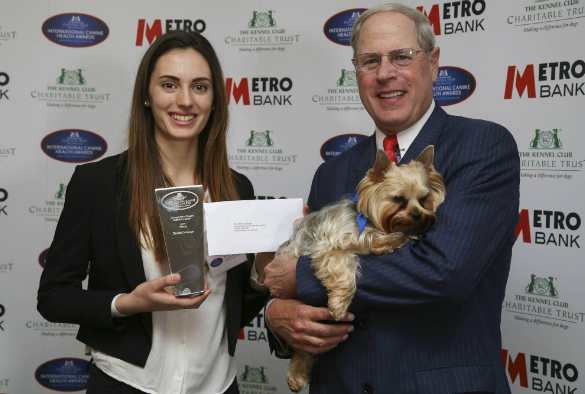 Harriet, who will receive £5,000 towards her work as part of the prize, won the award for her proposed research into papillomaviruses (PV) – a type of DNA virus. Harriet will look at how papillomaviruses can cause oral tumours in dogs, with a particular focus on canine throat cancer.

Similar studies have only used low-sensitivity equipment, which would make detecting papillomavirus near impossible. However, with the money awarded to Harriet, she can use more sensitive technology and expand the research.

Speaking about the award, Harriet said: “As someone who has always aspired to work at the forefront of scientific research, I am deeply honoured to have been chosen for this prestigious award. I am now able to conduct costly genetic sequencing as part of my study, which would not have been possible without the generosity of the Kennel Club Charitable Trust.”

Harriet hopes her project will advance the vet community’s understanding of the disease in dogs and potentially lead to further investigations as a model for the equivalent cancer in humans.

Following her win, Harriet is preparing to embark on a summer studentship, developing a research project to investigate whether a type of DNA virus may be implicated in the development of canine tumours.