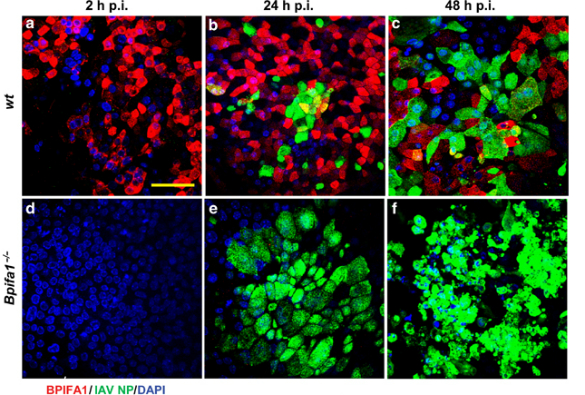 Researchers at the Universities of Liverpool and Sheffield have uncovered an unappreciated role for the mucosal host defence protein, BPIFA1/SPLUNC1, in defence against early infection with influenza A.

Influenza A can cause an acute infection of the lungs that can spread easily from person to person. It is a major public health problem as up to one billion people are infected by the virus every year with 500, 000 associated deaths. The mechanisms employed by Influenza A to infect the epithelium of the airways remains to be elucidated. The virus has to circumvent a range of defence mechanisms that the lung employs on its epithelial surface to prevent viral entry. These defences are both physical and biochemical, with the biochemical defences being provided by some of the proteins secreted onto the airway surface.

This study, funded by grants from the BBSRC to Professor James Stewart and Dr Gail Leeming (Liverpool) and Professor Colin Bingle and Dr Lynne Bingle (Sheffield) has shown that one particular mucosal protein, BPIFA1/SPLUNC1, appears to provide protection against the early stages of influenza infection. The research shows that mice lacking the protein are more readily infected by an influenza A challenge and airway cells lacking the protein are infected faster. The study goes someway to uncovering a biological role for this abundant protein. It suggests that the protein functions to coat the epithelial cell surface and protect the ciliated cells from infection. It remains to be seen if this effect is specific to Influenza A or if the protein offers protection against other respiratory pathogens.

This work highlights the value of combining in vitro and in vivo approaches to understand the basis of antiviral host defence and has identified BPIFA1 as novel target for preventing influenza. Modulation of levels of BPIFA1 might have the potential to influence infection rates by influenza A.