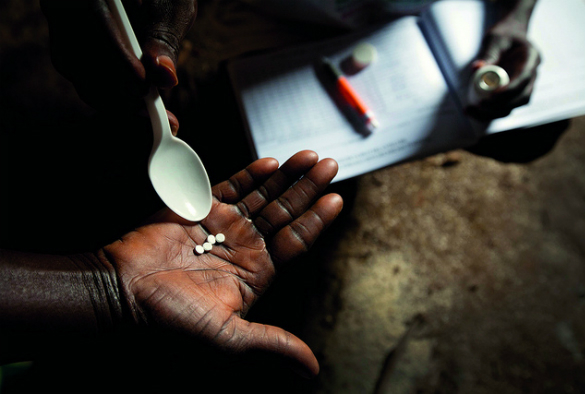 The University of Liverpool is part of a new $3.6 million international project to put into action a strategic plan to create a preventative vaccine for River blindness, with the ultimate goal of eliminating the disease from Sub-Saharan Africa.

River blindness, scientifically known as onchocerciasis, is a skin and eye disease caused by Onchocerca volvulus, a parasite that can cause permanent blindness. An estimated 18 million people are still infected with O. volvulus, including 12.2 million who suffer from Onchocerca skin disease and 1.025 million people who have permanent vision loss, according to the World Health Organization and the Global Burden of Disease Study 2015.

Led by the New York Blood Center (NYBC) and funded by the National Institutes of Health’s (NIH) National Institute of Allergy and Infectious Diseases, a consortium of partners will continue their work on developing a prophylactic vaccine for the disease.

The group will test vaccine formulations in mice to identify those that induce the highest protective immunity. Formulations will then be tested in naïve calves against a natural infection with O. ochengi, a closely related parasite known to mimic the immunological status of humans living in regions susceptible for O. volvulus infection. Once the optimal vaccine formulation is found, the consortium will move to clinical development and first-in-human clinical phase 1 trials by the year 2020.

Dr Ben Makepeace, from the University’s Institute of Infection and Global Health, said: “I am delighted that the University of Liverpool, alongside our partners from the Cameroon Academy of Sciences, have been provided with a subcontract from NYBC of $900,000 to test a river blindness vaccine in cattle. If it works in cattle, we can be much more confident that it will be effective in humans too, contributing to elimination of this terrible disease from Africa.”

Dr Sara Lustigman, who is leading the project from NYBC, said: “New tools are desperately needed, particularly a prophylactic vaccine that will support the elimination of this disease rather than only controlling it by mass drug administration (MDA) with ivermectin, which reduces transmission but does not cure the disease.”

“We believe that our strategic goal should be to vaccinate children who have not yet had access to MDA with ivermectin; the vaccination will prevent infection in this vulnerable population, and also help prevent reintroduction of infection in areas where it might have been controlled through MDA. This is what these essential clinical trials will help us to prove.”

Lord Alexander John “Sandy” Trees, Emeritus Professor of Veterinary Parasitology, University of Liverpool, and Crossbench Member of the United Kingdom’s House of Lords said: “It is very exciting to see that partners from United States, UK and Africa have joined forces to advance the world’s first onchocerciasis vaccine and continue on a mission I was part of.” Lord Trees has made significant contributions to the field of tropical medicine, and in particular to those suffering from river blindness in West Africa.

The other collaborative partners on the NIH grant are Dr. Maria Elena Bottazzi of the Baylor College of Medicine in Houston and Dr David Abraham of the Thomas Jefferson University in Philadelphia.

Dr Makepeace and the University of Liverpool are part of the international initiative TOVA – The Onchocerciasis Vaccine for Africa – which was established in 2015 and is comprised of 14 world-renowned scientists and research centers. Its mission is to develop recombinant protein-based vaccines that will support the efforts to eliminate River Blindness in Sub-Saharan Africa. More information on TOVA Initiative can be found at: http://www.riverblindnessvaccinetova.org