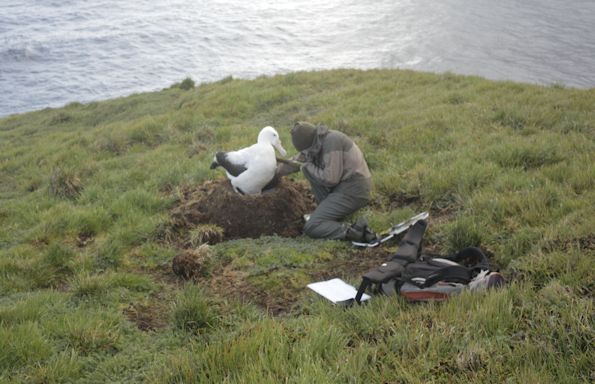 An international research team involving the University has tracked the foraging patterns of albatrosses in the southern ocean and found that nearly 80% of them follow fishing boats, giving scientists new insight into the risk fishing vessels present to seabirds.

The extent to which albatrosses and fishing vessels overlap was revealed by newly developed XGPS radar loggers which were fitted to fifty-three incubating wandering albatrosses. The loggers are able to detect vessel radar by an omnidirectional micro strip antenna integrated with the bird’s geo-positional GPS device.

The data showed that during breeding, tagged Crozet wandering albatrosses patrolled over an area of more than 10 million square kilometres and as much as 79.5% of the birds equipped with the loggers detected vessels, at distances up to 2500 kilometres from the colony.

About 300,000 seabirds are killed annually in longline fishing, including albatrosses which are an endangered species and one of the most threatened families of birds internationally, with 15 of the 22 species in the group threatened with extinction.

The study took place in Possession Island in the Crozet Islands, in the southern Indian Ocean, from January to March in 2015 and 2016 and the research team included the University, the Centre d’Etudes Biologiques de Chize, France, Sextant Technology Ltd and the Museum of New Zealand Te Papa Tongarewa.

Henri Weimerskirch, from the Centre d’Etudes Biologiques de Chize who was the lead author, said: “This study is incredibly important, as albatrosses are well-known ship followers and their populations have been severely impacted through accidental mortality due to their encounters with fishing vessels.”

Liverpool Ecologist, Dr Samantha Patrick, said: “We know very little about fisheries in international waters due to both logistical and political constraints.  However, wide ranging seabirds spend a large proportion of their time in these areas and so understanding their behaviour throughout their range is paramount.”

Susan Waugh, from Museum of New Zealand Te Papa Tongarewa, added: “This high rate of encounter shows that a far higher proportion of the population are exposed to fisheries mortality risk than previously supposed. The tagged birds showed varying patterns of encounter and attendance at vessels that challenge our perception of foraging behaviour of seabirds.”

The paper `Use of radar detectors to track attendance of albatrosses at fishing vessels’  is published in the Conservation Biology online journal. See the full study here: http://onlinelibrary.wiley.com/enhanced/exportCitation/doi/10.1111/cobi.12965

The research was funded by the French Polar Institute (IPEV) and the European Research Council.