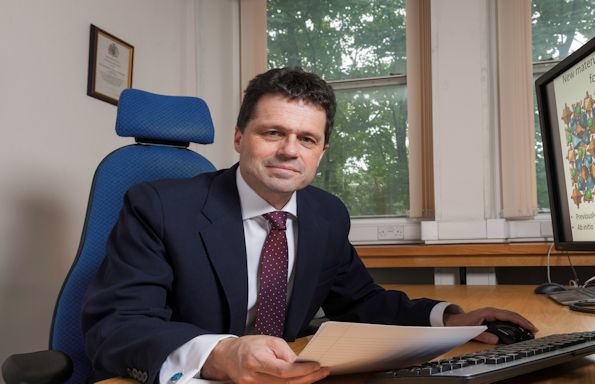 Professor Matthew Rosseinsky FRS from the University’s Department of Chemistry has been awarded one of the Royal Society’s most prestigious awards, the Davy Medal, in recognition of his “advances in the design and discovery of functional materials, integrating the developments of new experimental and computational techniques.”

The Davy Medal is named after Humphry Davy FRS, the chemist and inventor of the Davy Lamp, and was first awarded in 1877. It is awarded annually to an outstanding researcher in the field of chemistry. Previous winners of the Davy Medal include Marie Curie, Linus Pauling and Dmitri Mendeleev,creator of the Periodic Table. More recently, Nobel prizewinners Sir Fraser Stoddart and Ahmed Zewail have received the Medal.

This is the second Royal Society award for Professor Rosseinsky, who in 2011 received the Hughes Medal for his highly influential discoveries in the synthetic chemistry of solid state electronic materials and novel microporous structures.

Professor Rosseinsky joined the University of Liverpool in 1999. He was elected a Fellow of the Royal Society in 2008 and became a Royal Society Research Professor in 2013. He is currently a member of the governing Council of the Engineering and Physical Sciences Research Council.

Professor Rosseinsky said: “I am completely delighted, because the Royal Society is a beacon for scientific excellence that is important to me. I am also grateful for the recognition the award brings to the work of my colleagues in Liverpool and our collaborators all over the world.”

Venki Ramakrishnan, President of the Royal Society, said: “The Royal Society has a long-standing tradition of celebrating the best and brightest scientists. The winners of this year’s medals and awards have made outstanding contributions to their field and I congratulate them for their distinguished work and the advancement of science as a whole.”

“Materials Chemistry is one of the most critical and challenging subjects of modern day research. This Davy Medal recognises the advances made by Professor Rosseinsky in developing a systematic approach to Materials Discovery that combines theoretical design and synthesis. The methodology is revolutionising the way that materials are discovered for desired functional properties, a problem that lies at the heart of development for just about any consumer or industrial application you could think of.”

Professor Rosseinsky’s research pushes the boundaries of how materials are designed and discovered. It addresses the need to accelerate the rate at which materials are identified to enable new technologies, such as safer batteries and more energy-efficient ways to process information, and to create new basic science.

As there are so many possible combinations of atoms that can form materials, finding new, stable and high-performing materials has been a slow and resource-intensive process, blocking progress in both technology and science. The Medal recognises his work in developing new approaches to tackle this key challenge, emphasising the synergy between experiment and calculation by combining computer calculations with the understanding arising from experimental chemical synthesis.

The Royal Society is a self-governing Fellowship of many of the world’s most distinguished scientists drawn from all areas of science, engineering, and medicine. The Society’s fundamental purpose, reflected in its founding Charters of the 1660s, is to recognise, promote, and support excellence in science and to encourage the development and use of science for the benefit of humanity.

The University of Liverpool’s commitment to cutting-edge materials chemistry research is signalled by the recently completed Materials Innovation Factory, a unique £68M public/private partnership between the University and Unilever due to officially open later this year, which offers access to the highest concentration of automated chemistry lab equipment in the world, allowing researchers and industry a unique opportunity to collaborate to advance materials discovery.