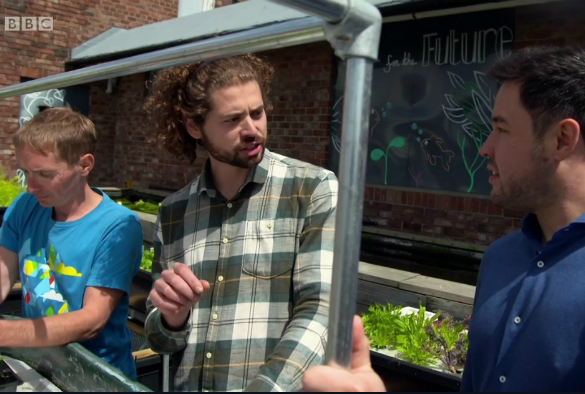 A pioneering social enterprise founded by two University of Liverpool scientists is featured on the latest episode of the BBC’s Countryfile.

Farm Urban develops and tests the most efficient ways to grow food in urban environments, focusing primarily on aquaponics systems, which grow fish and vegetables simultaneously in a closed-loop ecosystem.

The ‘cities’ themed episode looked at some the inventive and inspiring ways that Britain’s urban spaces and communities are connecting with nature, and showed how Farm Urban’s aquaponics systems allow food to be grown in unexpected urban spaces.

Co-founders Dr Paul Myers and Dr Jens Thomas, who are post-doctoral researchers at the University’s Institute of Integrative Biology, were interviewed about the initiative by presenter James Wong at the Liverpool Guild of Students’ aquaponics rooftop farm.

The programme highlighted how Farm Urban uses aquaponics as an educational tool to teach local people about hi-tech future food systems, inspire them to connect with their environment and empower them to make positive and informed choices.

A striking ‘double helix’ system co-designed by Farm Urban with local students at the Liverpool Life Sciences UTC and a state-of-the-art aquaponics installation at the new Alder Hey Children’s Hospital were also featured.

Farm Urban was formed in 2014 with the aim of linking leading scientific research with local food production. Over the past three years several aquaponics sites around Liverpool have been developed, ranging from smaller, experimental, community-based sites, to larger more commercially-focused enterprises.

This month, the team is also launching an immersive summer to help uncover the next generation of scientists, entrepreneurs and leaders. The ‘School for Eco-Entrepreneurs’ runs from 14-18 August and is offering masterclasses from world leading scientists, leaders and entrepreneurs as well as visits urban farming projects across the city.

Visit www.farmurban.co.uk for more information and keep up to date with the team’s latest news on Twitter @Farm_Urban.