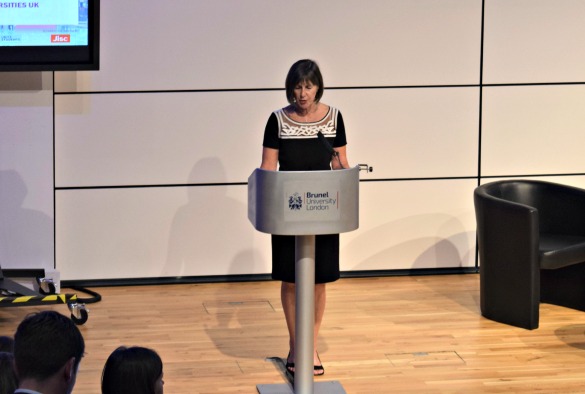 Our Vice-Chancellor, Professor Janet Beer, has used her first speech as President of Universities UK (UUK) to call on universities to do more to connect with their communities and demonstrate that they are a force for good.

Professor Beer was giving the keynote speech at the opening of the second day of UUK’s annual conference, which is taking place at Brunel University, in front of an audience including vice-chancellors from across the country, the media, and the minister for universities Jo Johnson MP.

In a wide-ranging speech she also talked about the need to ensure fairness for students and their families in the way university places are funded, and highlighted UUK’s campaign to increase the number of students who study, work or volunteer abroad.

Speaking about the role of universities in the light of criticism of the sector over the summer, Professor Beer said: “Many of the headlines over recent months have arguably stemmed from the fact that we have not as university leaders stood up to make the case for why universities matter: to individuals, to our local communities, and to society at large. Over the next two years as the sector’s representative I will use my voice to emphasise the positive and profound impact of universities throughout our nation.”

Professor Beer said universities make a unique contribution to society, citing an example from Liverpool to support her point: “Since moving to Liverpool in 2015 I have witnessed the growth of the Knowledge Quarter in the city cheek by jowl with the university, and have been inspired by the decision by Unilever to partner with us in a Materials Innovation Factory which houses one of the highest concentrations of materials science automation robotics in the world, providing space for academic research and teaching alongside Unilever’s product development and space for start-ups.”

The cost of studying at university has been higher on the political agenda since the General Election campaign earlier in the year. During her speech, the Vice-Chancellor referred to the Organisation for Economic Cooperation and Development’s view that England is “one of the few countries to have figured out a sustainable approach to higher education finance” before emphasising the need to ensure fairness for all.

She said: “The strong system we have in England provides sustainable funding for universities, promotes access for students from all backgrounds, provides employers with the skilled graduates our economy needs and is highly progressive. But it needs to be better understood and, crucially, it needs to feel fairer for our students and their families.

“It is therefore only right that we continue to examine the system and consider how it can be optimised to ensure it is as fair, accessible and progressive as possible while remaining affordable. In recent months both the First Secretary of State and the Secretary of State for Education have called for a proper debate on this issue and it is something we will willingly take part in, offering our experience, our evidence and our solutions.”

Professor Beer then called on the Government both to listen to students’ concerns about the financial challenges they face while studying and to consider reducing the interest rates on tuition fees for low and middle income earners. She also urged those in the sector as a whole to better explain the financial implications of higher education as an investment in each student’s future.

Meanwhile Professor Beer identified the importance of providing students with the opportunity to travel overseas during their studies, explaining: “There are clear social and cultural opportunities afforded by many universities. UK students live and learn in global classrooms, and those who have the chance to study, work or volunteer abroad are likely to get better degrees and better jobs.

“However, only 7.2% of UK students currently travel abroad as part of their degree, which is why UUK has launched a campaign to boost outward student mobility with the aim of doubling this number. In this context, a speedy and satisfactory resolution to the current uncertainty around our continued access to the Erasmus+ programme would be helpful.”

The conference comes at the start of Professor Beer’s two-year tenure as President of UUK, which has an influential role in shaping higher education policy and aims to help maintain the world-leading status of UK universities.