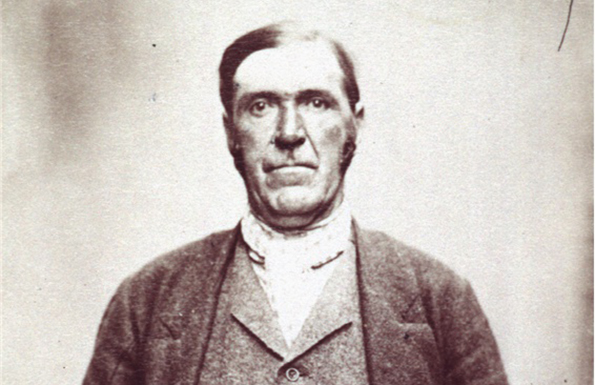 Described as ‘a giant’ – he was 5ft 11in – Mark Jeffrey was found guilty of offences both in Britain and Australia, it seems frequently prompted by food availability. He wrote an autobiography at the age of 68, many years after transportation

The children of convicts born in the Australian colonies grew up taller than they would have done if their parents had not been sent into exile, our latest study shows.

Male Tasmanian-born prisoners, arrested in the second half of the nineteenth century, were over four centimetres taller, on average, than transported convicts. And they were nearly two centimetres taller than free migrants who were born in Britain and Ireland. This height advantage provides a vivid illustration of the difference in conditions experienced by old- and new-world working-class people in the late eighteenth and early nineteenth century.

The differences in height are the result of a number of different public and personal health factors, including the increased availability of food (protein was comparatively abundant and affordable in the Australian colonies, and the comparatively benign environment (lower population density and cleaner drinking water). These factors, which inhibited childhood growth in the UK, enabled the Australian-born children to be taller than their UK-born parents (80% of height potential is genetic, and 20% is determined by environment).

This is one of a number of surprising findings to come out of the Digital Panopticon project, a survey of tens of thousands of convicts that British courts sent to the Australian penal colonies between 1788 and 1868. The careful piecing together of life histories for transported convicts and convicts who were confined in British prisons, reveals the longer-term impacts of transportation and imprisonment.

It is now possible to prove that, while Australian convicts were coerced and subjected to a frightening array of punishments, their health was surprisingly good – at least for those who survived the trip.

After the high rates of mortality on some early convict voyages, the mandatory inclusion of surgeons on subsequent voyages greatly improved the survival rates of those who sailed. It also helped that sick and weak prisoners were precluded from taking the voyage, so most convicts survived.

From the 1850s onwards, every Australian colony routinely printed descriptions of discharged prisoners. Among the identifying details contained in these notices are information on place and year of birth, height, ship that brought an individual to the colony and details of the offence the person was convicted of.

Using those records, our analysis of the heights of prisoners reveals that Tasmanians (many of whom were the children of convicts) not only grew up taller than people born in the UK, but they were also taller than those born in the Australian mainland colony of Victoria.

Although Victoria boomed after the discovery of gold in 1851, and was much wealthier than Tasmania, Tasmania’s slower economic growth protected locals from some of the more pernicious side effects of rapid urbanisation, including deteriorating water quality and a rise in associated childhood diseases. Victorian cities were therefore much more similar to UK cities, and suffered similar disadvantages.

Our analysis also revealed that if your mother had been a convict, you were more likely to be taller than prisoners whose mothers had not been convicts. This could be the result of the small size of convict families. Female convicts weren’t allowed to marry until most of their sentence had been served, so they tended to start families later in life, and this reduced family size. As the families of former convicts tended to be small, it is possible that more resources, especially food, were available per child.

There is little evidence to suggest that Tasmanian children born to convict parents went on to endure repeated spells in local prisons. There is, however, reliable evidence that those transported to Tasmania experienced better lives than those who were imprisoned in the UK – at least in terms of health – and that was also the case with their children and their grandchildren.