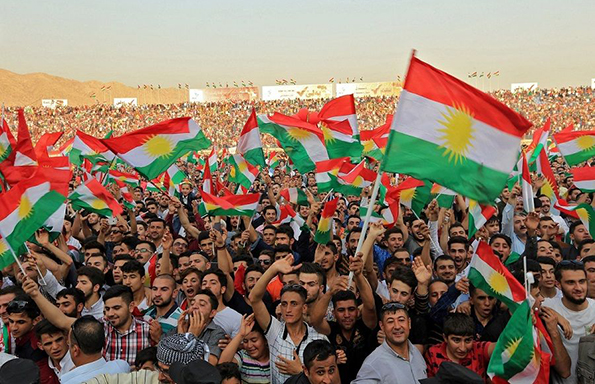 The referendum in Iraq’s Kurdistan Region saw an overwhelming majority of eligible voters casting their ballot in favour of independence. The local Independent High Elections and Referendum Commission announced that over 3 million people participated in the referendum out of less than 5 million people entitled to vote. The details of these figures are being disputed by the ‘No for Now’ movement within the region, especially in relation to the size of those sectors of society who boycotted the referendum, cast a no vote, or left their ballot papers blank. That said, a significant support for independence can hardly be questioned.

But whatever we make of the referendum’s exact data, there exist at least four points that we should keep in mind.

First, the situation of the Kurds in Iraq and indeed in the whole region, straddling Turkey, Syria and Iran doesn’t come out of nowhere. It is deeply entangled with the very existence and functioning of those states as we know them today. As the Ottoman Empire collapsed, the Kurds who had been living within it were given a scheme of ‘local autonomy’ under the 1920 Treaty of Sèvres, which included a guided process towards the independence of the Kurdish areas if a majority of the population so desired and independence was deemed sustainable by the League of Nations. The 1923 Treaty of Lausanne buttressed the birth of the Republic of Turkey but left the Kurds with no state of their own and even opened up loopholes as to whether the Kurds could be treated as a minority group under the treaty (a proposition that Ankara has consistently denied, despite calls for a more balanced reading). More broadly, the combination of colonial powers’ agendas and perceptions and the fiercely homogenising nationalism that followed in the region made the Kurds the most obvious target of brutality and repression.

So the Kurds – one of the largest ethno-national groups in the Middle East – do have a point when it comes to seeking a better accommodation of their identity and better access to decision-making and resources. Their claims cannot be dismissed as lacking legitimacy.

Second, talk of a United Nations Charter-backed ‘legal’ right to self-determination for the Kurds should not be overstated. Decolonisation aside, there is no distinct right to independence for sub-national groups, although independence can certainly be pursued and achieved through negotiations with the central government. ‘Secession in the streets’, as the Canadian Supreme Court put it in a much quoted judgment over the status of Quebec, would be the only alternative to political deadlock – indeed, an immense political gamble for the Kurdistan Region given the almost non-existent interest in recognising an independent Kurdistan under those circumstances by the international community.

Third, as one would have expected the international negative reaction to the very holding of the referendum – from the United Nations to the United States, Russia and the neighbouring states – reflects a classic legal and political mantra underlying virtually all secession attempts. What makes the Kurdish question somehow special in the region is its inevitably transnational dimension. All neighbouring states are fearful of their Kurdish minorities’ potentially secession ambitions. Some of them, notably Turkey and Syria, are either engaged in a military confrontation with elements of the Kurdish community or look upon them as major players in the highly successful fight against the ISIS or Daesh terrorist network. Many of the regional reactions exaggerate the impact of last week’s referendum, speaking volumes about the exclusively security lens through which these states view the Kurdish question as opposed to an opportunity to improve their respective human rights records vis-à-vis the Kurds.

Legally speaking, solutions have to be found at the national/constitutional level in line with human rights standards, though some form of comprehensive trans-border settlement or peace agreement across the region could prove useful over the longer term (think of Northern Ireland or Bosnia).

Fourth, Erbil’s dream of Kurdistan as a sovereign state taps into a pattern of decisions – local  referenda and/or declarations of independence – outside of an agreed process with the central government – from Kosovo to Crimea, to Catalonia, just to name a few. From an international law standpoint, there is very little evidence, though, that this approach has ever attracted significant sympathy, regardless of the legitimacy of a particular group’s self-determination claim or its genuinely free political expression.

Granted, there might be situations – as in the case of Yugoslavia – where the cumulative impact of unilateral acts of independence can lead to a de facto reshaping of acceptable self-determination units out of the ashes of a federal state. Kosovo’s ostensibly self-conferral of statehood in spite of Serbian assertions of sovereignty can still be (and has actually been) recognised by states, though not by all of them. And proponents of ‘remedial’ secession argue precisely on the basis of a unilateral right to independent statehood as a remedy against gross human rights violations suffered by the group who is seeking it. Yet none of these variables suggests that unilateral independentism is, in and of itself, acceptable, let alone desirable, save in tightly defined settings (if at all).

The Kurdish Regional Government has candidly acknowledged the non-binding nature of the referendum, given the lack of a constitutionally agreed ‘exit’ mechanism. However, whether the prevailing yes vote can generate serious negotiations with Baghdad for independence over a period of time, or whether it might facilitate a settlement between the regional government and the non-Kurdish groups within the disputed areas such as Kirkuk who have boycotted the referendum, remains to be seen. After all a process, including a referendum over such disputed territories, has been long enshrined in the Constitution. For now, though, the muscular response from the central government strikes anything but a conciliatory note.

Be that as it may, invoking the right to statehood through some kind of plebiscite can only begin to unravel the complications of inter-group diversity in Iraq and in the region, not solve them. The key to the impasse lies elsewhere: it lies in restoring the participatory and power-sharing thrust of the 2005 Constitution of Iraq and the need to ensure that the process of democratisation and federalisation of Iraq prevails over sectarian and authoritarian proclivities. The Kurdish leadership have long supported this process and have in fact consciously strategized their community’s self-determination through extensive autonomy within a united Iraq. In the end, it is not about breaking away but about forging that sort of lasting ‘multinational’ thinking that has been all too often brutally suppressed by the twists and turns of state-making across vast swaths of post-Ottoman territories.

A fuller argument about self-determination is available here: booksandjournals.brillonline.com/content/journals/18719732/19/4-5