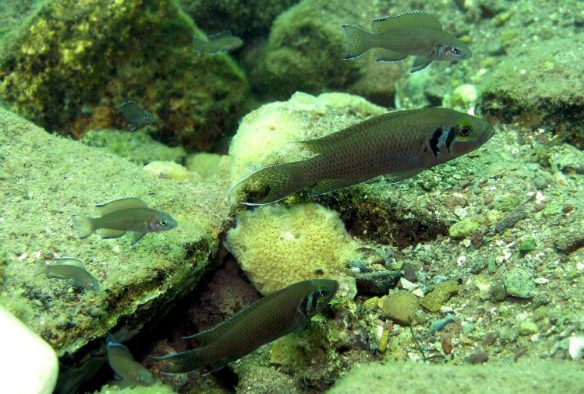 In the animal kingdom there are endless ways for individuals to reproduce, find a partner and raise their offspring. Known as ‘social systems’ these can range from one male reproducing with one female to ‘cooperative breeding societies’ where so called ‘brood care helpers’ refrain from reproduction to help raising offspring of dominant individuals.

Cooperative breeding is regarded as the pinnacle of social evolution and raises the question of how and when it is decided which individual will become dominant to reproduce and which will become a helper to refrain from reproduction for a prolonged period of time.

A team of researchers have questioned if and how early social and ecological experiences can influence the decision to become a subordinate helper or a dominant breeder by using a cooperatively breeding cichlid fish (Neolamprologus pulcher).

Lead researcher Dr Stefan Fischer, a postdoctoral researcher at the University’s Institute of Integrative Biology explained: “In many cooperatively breeding vertebrates it has been shown that environmental factors such as predation risk and physical properties such as strength are important factors in determining dominance. To fully understand individual decisions and the influence of early experience on social structure we conducted a long-term experiment, with relevant ecological and social experiences early in life, and subsequent surveillance of individuals for the rest of their life.”

Over three years, the team led by Professor Barbara Taborsky from the University of Bern, Switzerland experimentally reared more than 400 test fish juveniles by varying the family environment (social experience) and simulated predation threat (ecological experience) and conducted more than 1100 behavioural experiments to understand how the fish were influenced by these differing experiences.

In contrast to previous studies, they found that early experiences can influence the decision of animals to pursue a ‘helper’ or a ‘dominant’ social trajectory. Importantly they also found that both social and ecological triggers were needed for this divergence of trajectories to form. Remarkably, the influence of ecological information during early life entirely reversed the significant effect of social experience. Such combination of early-life effects is hitherto unknown.

Dr Fischer added: “This is the first study to show that cooperatively breeding vertebrates are following social trajectories determined by their early-life experiences, which highlights how much more we still need to learn to fully understand important life-history decisions in highly social species.”

The paper ‘Divergence of developmental trajectories is triggered interactively by early social and ecological experience in a cooperative breeder’ is published in the Proceedings of the National Academy of Sciences of the United States of America.