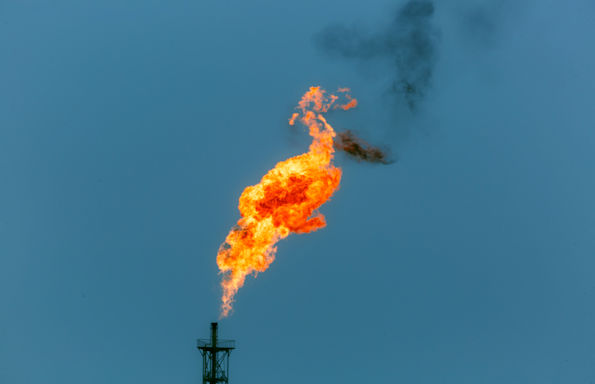 Researchers from the University of Liverpool have made a significant breakthrough in the direct conversion of carbon dioxide (CO2) and methane (CH4) into liquid fuels and chemicals which could help industry to reduce greenhouse gas emissions whilst producing valuable chemical feedstocks.

This is the first time this process has been shown, as it is a significant challenge to directly convert these two stable and inert molecules into liquid fuels or chemicals using any single-step conventional (e.g. catalysis) processes bypassing high temperature, energy intensive syngas production process and high pressure syngas processing for chemical synthesis.

The one-step room-temperature synthesis of liquid fuels and chemicals from the direct reforming of CO2 with CH4 was achieved by using a novel atmospheric-pressure non-thermal plasma reactor with a water electrode and a low energy input.

Dr. Xin Tu, from the University’s Department of Electrical Engineering and Electronics, said: “These results clearly show that non-thermal plasmas offer a promising solution to overcome the thermodynamic barrier for the direct transformation of CH4 and CO2 into a range of strategically important platform chemicals and synthetic fuels at ambient conditions. Introducing a catalyst into the plasma chemical process, known as plasma-catalysis, could tune the selectivity of target chemicals. ”

“This is a major breakthrough technology that has great potential to deliver a step-change in future methane activation, CO2 conversion and utilisation and chemical energy storage, which is also of huge relevance to the energy & chemical industry and could help to tackle the challenges of global warming and greenhouse gas effect.” 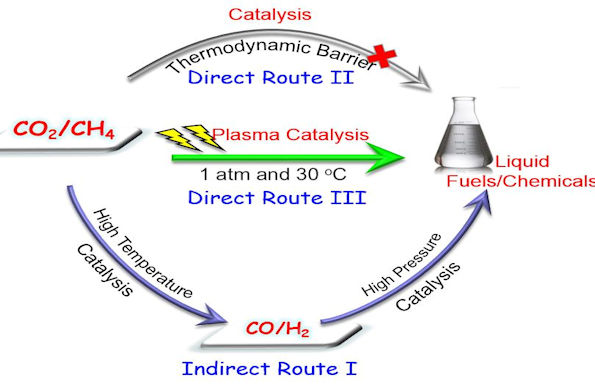 Methane and carbon dioxide emissions are considered greenhouse gases which contribute to global warming and climate change. The largest source of CO2 emissions is from burning fossil fuels for electricity, heat, and transportation, while methane is mainly emitted during the production, processing, transportation and storage of natural gas and crude oils.

The UK emits more than 470 million tonnes of CO2 per year and of this 39% is emitted by the energy and chemistry sectors.

In order to tackle the global energy challenges resulting from greenhouse gases, new and emerging technologies are being developed at an accelerating pace. Plasma, the fourth state of matter, an electrically charged gas mixture, offers a promising and attractive alternative for the synthesis of fuels and chemicals, providing a unique way to enable thermodynamically unfavourable reactions to take place at ambient conditions.

In non-thermal plasmas, the gas temperature remains low (as low as room temperature), while the electrons are highly energetic with a typical electron temperature of 1-10 eV, which is sufficient to activate inert molecules (e.g. CO2 and CH4) present and produce a variety of chemically reactive species including radicals, excited atoms, molecules and ions.

These energetic species, which are produced at a relatively low temperature, are capable of initiating a variety of different reactions. Plasma systems have the flexibility to be scaled up and down. In addition, high reaction rate and fast attainment of steady state in a plasma process allows rapid start-up and shutdown of the plasma process compared to other thermal processes, which significantly reduces the overall energy cost and offers a promising route for the plasma process powered by renewable energy (e.g. wind and solar power) to act as an efficient chemical energy storage localised or distributed system.

The highly attractive process could also provide a promising solution to end gas flaring from oil and gas wells through the conversion of flared methane into valuable liquid fuels and chemicals which can be easily stored and transported. Around 3.5% (~150 billion cubic meter gas) of the world’s natural-gas supply was wastefully burned, or ‘flared’, at oil and gas fields, emitted more than 350 million tonnes of CO2.

The paper ‘One-Step Reforming of CO2 and CH4 into High-Value Liquid Chemicals and Fuels at Room Temperature by Plasma-Driven Catalysis’ (DOI: 10.1002/ange.201707131) is published in Angewandte Chemie.