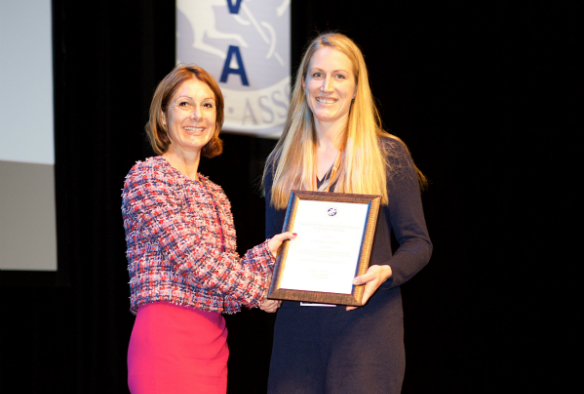 Victoria Nicholls, part of the University’s Veterinary Postgraduate Unit and the 2016/17 President of the British Equine Veterinary Association (BEVA), rounds up the highlights from the 56th BEVA Congress, which recently took place in Liverpool.

“With over 101 hours of continued professional development, 125 speakers, 3 debates, 10+ hours of practical workshops and 1 live horse, BEVA 2017 was bigger and better than ever before!

After an amazing twelve months as BEVA President, it was also time for me to formally hand over the role to Jonathan Pycock, who takes the reins for 2017/18.

As outgoing President, I had the privilege of presenting the Sam Hickman award to my friend and mentor Professor Derek Knottenbelt who gave an inspiring, informative and emotional opening plenary lecture entitled “Using the past to make the future better.” During his talk he reflected on his long career at the University of Liverpool and received the first standing ovation in BEVA congress history.

Members of the Equine Hospital team featured prominently in the congress line-up, with Fernando Malalana and Luis Rubrio Martinez running some of the successful practical hands-on workshops which the University partnered with BEVA to deliver.The success of these workshops was in no small part due to the University’s Tony Jopson who diligently prepared all of the practical equipment and cadaver material.

We had a strong presence in the speaker line-up too, with Fernando and Luis joined by BEVA favourites Professor Debra Archer, Harry Carslake and April Lawson, along with a plethora of former residents, interns and students. Professor Archer and Harry also hosted the dynamic and practical BEVA Advanced two-day colic course at Leahurst immediately prior to congress.

There was some prizewinning to celebrate too, with Liverpool research published in the Equine Veterinary Journal winning the BEVA Trust Peter Rossdale Equine Veterinary Journal Open Award. Lead author Cajsa Isgren was presented with the prize for the work, which investigated factors associated with infection of abdominal incisions following colic surgery. Well done to everyone involved!

The Veterinary Postgraduate Unit and the Equine Hospital hosted a very successful Liverpool Vet School alumni reunion during the Happy Hour event on the second day of congress, where Professor Cathy McGowan tempted old friends and new to the Liverpool stand to complete an EVBM questionnaire on changing practices of laminitis workup in horses with the aid of some delicious cupcakes.

On a personal note, I’m extremely grateful to all my Liverpool colleagues for helping make the Congress such a huge success, as well as for the amazing support I received during my busy year as president. It’s quite an honour when you realise that Liverpool had both the Presidents of BEVA and BSAVA (Professor Susan Dawson) at the same time.

Looking ahead, we now have the London Vet Show in our sights with a strong team of speakers and a University of Liverpool Veterinary Postgraduate unit stand in attendance. Come and say hello in November 2017 in London!”