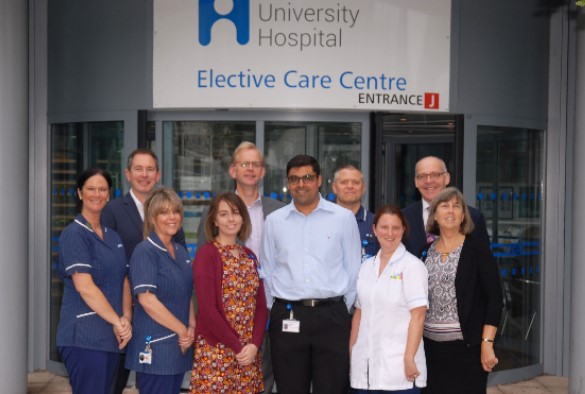 MHNORG, a research collaboration between the University and Aintree University Hospital, the Liverpool Dental Hospital and Clatterbridge Cancer Centre, brings together a multidisciplinary team of cancer surgeons, medical oncologists and scientists.

The Medical Research Council (MRC) and the National Institute for Health Research (NIHR) have awarded £1.5m for two trials, entitled ‘SAVER’ and ‘DEFEND’.

The SAVER trial is a phase II chemoprevention trial with a focus on prevention of oral cancer developing from high risk precursors. The DEFEND trial addresses the prevention of complications in head and neck surgery.

Both are randomised controlled trials developed through North West Surgical Trials Centre, part of CRUK Liverpool Cancer Trials Unit. The DEFEND trial will also fund a PhD training programme for a surgical trainee, Mr Mandeep Bajwa, which is led in collaboration with the MRC North West Hub for Trials Methodology.

Most head and neck cancer patients are treated with a combination of surgery, radiation and/or chemotherapy drugs, which can cause significant side effects. Survival figures for head and neck cancers are improving, and MHNORG is also developing further major funding proposals to modify treatments in virally mediated tumours (Professor Terry Jones) and in exciting new areas of cancer immunotherapy (Dr Joe Sacco).

Putting the patient at the centre of research

Professor Shaw, said: “The statistics and growing understanding of head and neck cancers highlight the need to develop prevention, targeted therapies with less side effects, as well as better overall cure rates.

“These major grants highlight the rewards of an effective clinical academic collaboration between the University of Liverpool and Aintree Trust, putting the patient at the centre of head and neck oncology research.”