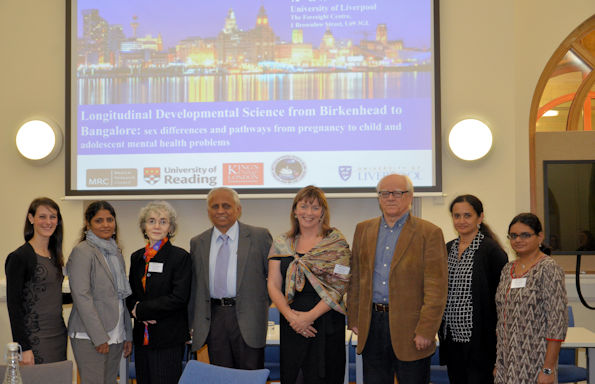 A conference to discuss the improvement of mental health outcomes for children in India and to mark the ten year anniversary of an influential mental health study has taken place in Liverpool this month.

Young children who frequently hit other people, who disobey rules and are disruptive in social and school settings, are much more likely than other children to show continued behaviour problems into adult life, including criminality, unstable relationships, poor work record, depression, substance use problems.

The problems arise from a complicated mix of genetic and environmental influences, in which some of the key risk factors include prenatal stress, early infant emotionality and harsh parenting.

For the past decade, Dr Helen Sharp, University of Liverpool, Professor Jonathan Hill, University of Reading and Professor Andrew Pickles, King’s College London have been investigating the impact of these factors on children’s mental health through the Wirral Child Health and Development Study.

The project commenced in 2007 and is funded by the Medical Research Council (MRC). At the beginning of the study, the project team recruited over 1,200 first time mothers during pregnancy and have followed the children until nine years of age.

The study has provided strong evidence that individual variations and environmental exposures in early life contribute to risk for mental health problems in later childhood and beyond. Through understanding the contributing factors, support for the families as well as therapeutic interventions can be established to reduce the risks.

The Wirral Study and other research in this area is making a difference in the UK: informing policies and practice which ultimately lead to better outcomes for parents and children. However it can be difficult to apply the findings to other countries. Research of this type is conducted almost exclusively in countries with Westernised standards of medical care and family arrangements.

Following discussions between Dr Helen Sharp and Professor Prabha Chandra from the National Institute of Mental Health and Neurosciences Bangalore (NIMHANS) a new successful grant application was submitted to develop a similar study in India. This plan built on the work already started by Professor Chandra and her colleagues in the Prospective Assessment of Maternal Mental health Study (PRAMMS) funded by the Indian Council of Medical Research – ICMR, in which the prevalence of anxiety and depression among a cohort of pregnant women, together with their associated antenatal health care utilization and health behaviours, was being examined in relation to pregnancy outcomes.

The three year project – Investigation of Psychosocial and Nutritional predictors of child mental health: longitudinal study of shared and distinctive risk and protective factors in UK & India – aimed to follow up the infants in the PRAMMS study to age 2. The £930,000 project was funded by the Indian Council for Medical Research and the UK’s Medical Research Council as part of the Newton Bhabha Fund.

The aims of the research are to study early risk and protective factors for childhood mental health problems, to identify prenatal and infancy risks that are common to Western and South Asian populations and those that are distinctive. The study findings in the longer term will directly inform the refinement of existing early interventions for child mental health in both South Asian and UK settings.

Together with a planned series of training events, the project is contributing to capacity building in the Indian clinical research domain by facilitating the sharing of experience and expertise in conducting longitudinal birth cohort studies and handling cross cultural measurements in maternal and child research.
Preventing mental health problems

This month (12-13 October) the University and NIMHANS delivered a conference, entitled ‘Longitudinal Developmental Science from Birkenhead to Bangalore: sex differences and pathways from pregnancy to child and adolescent mental health problems’, that explored the findings of the Wirral Study and other important longitudinal studies in the UK and Europe and some of the challenges and opportunities that arise from conducting similar research in a very different setting.

Dr Sharp, said: “Our partnership with Professor Prabha Chandra, Dr Geetha Desai and the team of researchers in Bangalore is proving very fruitful. We are examining the ways in which maternal stress and nutrition in pregnancy, and early patterns of caregiving, might influence child mental health and cognitive development in the UK and India.

“We are particularly excited because this is the first longitudinal study in India to focus on maternal and child mental health, as opposed to physical health which starts at the earliest stage of development in pregnancy. In the longer term we hope the findings will help us identify how best to prevent child mental health problems”

Professor BN Gangadhar, Director of NIMHANS, said “This collaboration with UOL is helping India establish a unique cohort for the first time in our country. This is the only cohort with detailed psychosocial and maternal mental health as well as child measures starting in pregnancy and addressing issues related to cross cultural factors in cohorts as well as measures- psychological, biological and developmental”