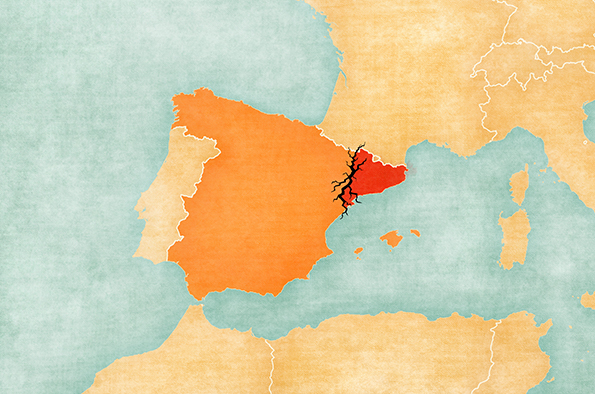 Charles Esdaile is a Professor of History (Napoleonic Europe, Modern Spain) in the University of Liverpool’s Department of History

As I write this piece, Spain, the country on which I have worked on for the past forty years, is on the brink of the worst crisis in its history since the death of Franco. In brief, faced by what amounts to a declaration of independence on the part of the Catalan government, the government of the country as a whole is in all probability going to be suspending the region’s autonomy statute and re-imposing the traditional model of direct rule from Madrid.

Such a move, it can safely be predicted, will produce confrontation on a massive scale with mass demonstrations and civic disobedience on the one hand and wholesale intervention by the police and security forces on the other. With feelings running high, violence would be all but inevitable, and in this situation there is no doubt who the winners of the propaganda battle would be: from Catalonia the cry would ring out that fascism was on the march – that the ghost of Franco had arisen – and across Europe headline after headline would respond with the words ‘Homage to Catalonia’.

Homage to Catalonia? I think not, but before I go any further let me first make a number of things very clear. First, I believe wholeheartedly in the defence of minority languages and cultures; second, and equally wholeheartedly, I lament and abhor the use of violence by the forces of the state except in cases where it is absolutely necessary and even then believe that it at all times should be measured and proportionate; and third, and still more wholeheartedly, I condemn without reservation the crimes which were committed against Catalonia under Francisco Franco and Miguel Primo de Rivera.

I am, then, a convinced supporter of Catalan autonomy, but that does not mean that I can even begin to bring myself to back the Puigdemont government. Far from it. Let us just for a moment accept that most Catalans (something that I would not rule out albeit with the proviso that said majority is probably very slim). However, the question then arises as to whether there is a moral case for secession.

Here the answer is clear enough: though it has suffered badly over the last ten years, Catalonia remains by far the richest, most prosperous, most developed and (arguably at least) most culturally advanced area of Spain; Catalonia has an extremely generous statute of autonomy; and Catalonia has won language rights so extensive that there are some who would argue that it is behaving in the style of a 1930’s Balkan dictatorship (one wonder how widely it is known that it is impossible for families whose mother tongue is Castilian – the language commonly referred to as Spanish – to obtain state education for their children in said mother tongue if they happen to live in Barcelona).

On top of all this, meanwhile, Spain has for the last forty years been a democracy, a flawed democracy perhaps – corruption, alas, has been endemic – but nonetheless a democracy, and not just that but a democracy that is clearly in the grip of massive cultural modernization (whilst there was once a real gap between Barcelona and Madrid, this is now much eroded). It is, perhaps, true that a greater proportion of the tax revenue that is derived from Catalonia goes to other parts of Spain than is spent there, but in what developed country is it not the case that richer regions subsidise poorer ones? Is not that one of the basic principles of redistributive taxation?

One could continue at considerable length in this vein, and all the more so as it is impossible not to suspect that at the heart of the self-image of Catalan nationalism is the belief that, if Catalonia is richer than the rest of Spain, it is because Catalans are superior to other Spaniards. However, in the end whether or not there is a case for independence is by-the-by.

The central issue is quite simply this: Spain has a constitution that was agreed by a nation-wide referendum, a constitution that is the guarantor of the freedom of all Spaniards, and a constitution that for over forty years has stood Spain extremely well – indeed, looking back at the past two centuries, forty years of such relative tranquillity is something of a record. One of the problems here is that, in the past, when one group of Spaniards or another have found themselves disadvantaged by the political process of the day, they have responded by rising in revolt. On 18 July 1936 that decision led to an appalling civil war: let us hope that eighty-one years on an exactly similar decision does not lead to a comparable result.

More
Catalonia’s fight is driven by a passion for neighbourhood, not nationhood