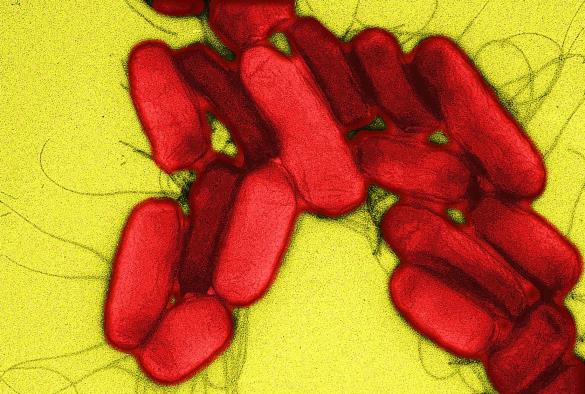 Scientists at the University of Liverpool and Public Health England have used Salmonella genome data from a UK public health surveillance study to gain new insights into the Salmonella epidemic in sub-Saharan Africa.

Invasive non-typhoidal Salmonellosis (iNTS) currently kills an estimated 400,000 people a year in sub-Saharan Africa. It is caused by a type of Salmonella Typhimurium (ST313) that generally affects individuals with weakened immune systems, is highly resistant to antibiotics and can develop into bloodstream infections.

New research published today in Genome Medicine, has identified a different and far less dangerous strain of ST313 bacteria in the UK, and identified key genomic differences that are helping scientists understand why the African strain causes such high levels of disease.

The research team analysed the DNA of more than 3,000 Salmonella Typhimurium samples collected by Public Health England since 2014, and discovered that 2.7% were ST313 bacteria. However, the UK-ST313 are different to the variants of ST313 found in sub-Saharan African. The infection caused by UK-ST313 is generally a less severe gastrointestinal illness, and the bacterial strains were susceptible to most antibiotics.

Further analysis revealed distinct and potentially important differences between the UK and African Salmonella, with the African bacteria all containing the DNA of two viruses integrated into their chromosomes.

Joint lead author Siân Owen, from the University’s Institute of Integrative Biology, said “Our findings suggest that these two viruses are always found in the African ST313 Salmonella, yet never in the UK variant. Such a strong association suggests that the acquisition of these viruses may have been an important event for the development of the African strain. The UK ST313 genomes are helping us to piece together the puzzle of how the African Salmonella evolved.”

The team also analysed the Salmonella genomes for genetic mutations that could affect the ability of the bacteria to cause disease. One of the ST313 isolates identified, which had been transported to the UK from Africa, carried a mutation that could have implications for future vaccine development, as well as a new combination of antibiotic resistance genes.

Professor Jay Hinton, who leads the University of Liverpool research group, explained: “Although the clinical picture of the Salmonella epidemic in Africa is well-established, little is known about the biology of the ST313 pathogen, making it harder to develop effective control strategies. This study highlights the valuable role that routine genomic sequencing here in the UK can play to improve our understanding and help tackle a really important health problem in the developing world.”

Dr Tim Dallman, from Public Health England, added: “Identifying this novel UK population of Salmonella has only been made possible by the recent introduction of routine whole genome sequencing of the Salmonella samples that cause human disease in England and Wales, allowing us to make important discoveries that would be missed by conventional microbiological methods.”

The researchers are now carrying out a detailed comparison of the UK and African ST313 variants to try and understand why the African Salmonella is causing such a high level of disease.

The study received funding support from the Wellcome Trust and was carried out in collaboration with the University’s Centre for Genomic Research and Liverpool School of Tropical Medicine.

The paper ‘Public health surveillance in the UK revolutionises our understanding of the invasiveSalmonella Typhimurium epidemic in Africa’ is published in Genome Medicine (DOI: 10.1186/s13073-017-0480-7).