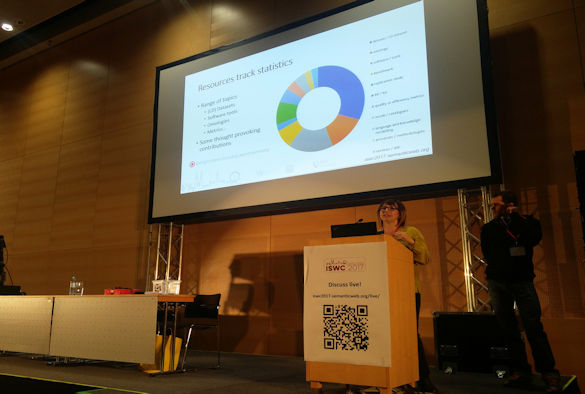 Dr Valentina Tamma, from the University’s Department of Computer Science, played a leading role as one of the three Programme Chairs at the 16th International Semantic Web Conference which took place in Vienna:

The annual International Semantic Web Conference (ISWC) is the premier international forum for the Semantic Web / Linked Data Community bringing together researchers, practitioners and industry specialists to discuss, advance, and shape the future of semantic technologies.

ISWC’17 took place from Oct 21st until Oct 25th and continued to bring together a diverse set of individuals with skills and interests ranging from Artificial Intelligence, to information systems, knowledge graphs and Web systems.

As with previous years, there was a steady increase in the adoption of knowledge technologies, although more often than not, their use is invisible to consumers.

This year’s conference attracted a record breaking number of submissions, and had over 600 attendees over the five day event. Almost a quarter of them were from industry, including some of the major IT tech players such as IBM, Google, Oracle and Fujitsu, as well as the major publishing houses such as Thomson Reuters (that also announced the first knowledge graph feed for their customers), Elsevier, Springer and IOS Press.

The keen interest from IT tech companies shows the high level of adoption of knowledge technologies in industrial applications, whether it be specific industries or horizontal technology.

The conference is organised across three independently run tracks: the Research, Resources and In-Use tracks. The Research track is home to the most ground-breaking results in the field, whereas the purpose of the In-Use track is to provide a forum for the community to explore the benefits and challenges of applying knowledge technologies in concrete, practical applications, and in contexts ranging from industry to government and science.

This year, I led the Resources track along with Freddy Lecue from Accenture.  The Resources track is devoted to sharing resources (datasets, ontologies, vocabularies, workflows, services, APIs and more) and the best practices needed to develop them.

The work presented in this track is crucial in order to consolidate research material, ensure reproducibility of results and in general gain new scientific insights. Furthermore, one of the requirements of this track was that the resources are published with a permanent identifier in order to ensure support to new scientific discovery results, and guarantee future access.

In recognition of the maturity of the field, two new Industry-focussed events were hosted by the conference this year.  A combined local business lounge and Semantic Web meetup, co-located with the Posters and Demonstration session and supported by the Vienna Business agency for the local community was organised, with the specific remit to reach out to the general public.

Furthermore, ISWC celebrated its first Job Fair, bringing together job candidates with open positions in both industry and academia.

The conference was characterised by lively discussions and interesting outlooks on a research field that is blossoming and whose adoption outside of academia is fuelling the digital economy in the UK and beyond.