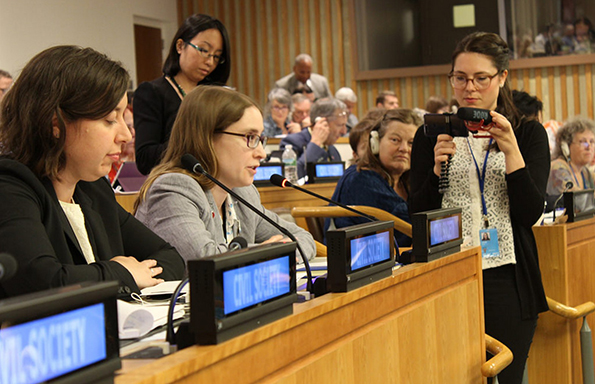 An Honorary Visiting Researcher in the University of Liverpool’s Department of Sociology, Social Policy and Criminology was among the team to win the 2017 Nobel Peace Prize.

The Nobel Committee awarded the 2017 Peace Prize to the International Campaign to Abolish Nuclear Weapons (ICAN) “for its work to draw attention to the catastrophic humanitarian consequences of any use of nuclear weapons and for its ground-breaking efforts to achieve a treaty-based prohibition of such weapons”.

Elizabeth Minor, an international steering group member for ICAN through her work with Article 36, told the University she was “extremely pleased” by the prestigious award.

Article 36, a UK-based not-for-profit organisation working to prevent the unintended, unnecessary or unacceptable harm caused by certain weapons, plays a central role in ICAN. It is on ICAN’s steering group and was heavily involved in getting the new UN Treaty Prohibiting the Use of Nuclear Weapons passed in July this year, with Elizabeth on-site in the UN in New York over the spring and summer to take part in negotiations and ensure the treaty was passed.

Article 36 also contributed heavily to the development of the strategic concept of a treaty banning nuclear weapons, and ensured provisions on victim assistance and environmental remediation were included and remained in it throughout the treaty negotiations.

“The Peace Prize gives us the chance to get the message out to a wider audience and to promote the treaty as a solution to the long term problem of nuclear disarmament.

“Today, nuclear weapons have been legitimised as a way of meeting various security challenges but we want to challenge the legitimacy of having these weapons in this process at all.

“We approached it from the slightly different angle of looking at the weapons and their characteristics and asking whether it is acceptable and legitimate to use them, rather than whether they are effective in keeping the peace.

“It used to be that states found biological and chemical weapons legitimate. Now they are considered abhorrent and nobody would make the case that they need those weapons.”

The awarding of the Peace Prize to ICAN comes 22 years after it was jointly awarded to Sir Joseph Rotblat, a University of Liverpool alumnus, and the Pugwash Conferences on Science and World Affairs “for their efforts to diminish the part played by nuclear arms in international politics and, in the longer run, to eliminate such arms”.

Today, Article 36 notes that the UN Treaty Prohibiting the Use of Nuclear Weapons “needs to be ratified by 50 countries in order to come into force … [but is] strongly opposed by those states that currently possess nuclear weapons, including by the UK.”