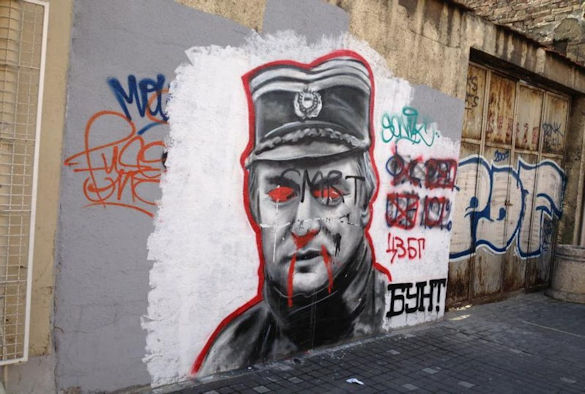 Convicted for genocide and other crimes. David Bailey, CC BY-SA

Anna-Marie Brennan, is a lecturer in Law at the University:

The conviction of Ratko Mladić in The Hague for genocide, war crimes and crimes against humanity committed during the Bosnian War hardly came as a big surprise. The evidence was strong and stacked up against him. Nearly 600 people gave evidence during his five-year trial including many of his victims. So any robust defence of the charges was always going to be a challenge for Mladić even with the support of a defence team comprised of the most talented lawyers in the world.

Mladić, dubbed the “Butcher of Bosnia”, commanded the Bosnian Serb
forces during the massacre of nearly 8,000 Muslim men and boys at Srebrenica and the three-year Siege of Sarajevo which caused nearly 10,000 civilian deaths.

Aside from one genocide charge he was found guilty of all the other ten counts
including a separate count of taking UN personnel hostage in an effort to thwart NATO airstrikes. Delivering yesterday’s verdict the presiding judge, Alphons Oria, held that the crimes, “rank among the most heinous known to humankind” and rejected his mitigation pleas of good character, ill-health and diminished mental capacity.

Dogged by health problems Mladić shakily occupied the defendant’s chair on Wednesday morning but following a toilet break he was quickly removed again from court after a tirade of abuse aimed at the judges. His sentence of life imprisonment was handed down in his absence.

Only time will tell whether his conviction will bring closure to the families of his victims who are still searching for the remains of loved ones nearly three decades after the war. Ethnic tensions still persist in the former Yugoslavia and many there regard Mladić as a hero who defended his people and believe that Wednesday’s judgment is a verdict against them as well.

US attorney Christopher Hale, who has worked at the tribunal, has gallantly argued that: “the weight of empirical evidence demonstrates that justice is one of the most vital components to achieving durable peace”. But in reality there is very little evidence to suggest that the trials have brought meaningful reconciliation to the region.

Whatever view we choose to adopt the statistics clearly speak for themselves.
Division between ethnic communities has grown since the end of the war. For
example, Banja Luka was once ethnically diverse – nearly 50% of its population
were Bosnian Serbs while Muslims and Croats represented 19% and 15%
respectively. In 2017, Banja Luka is almost 90% ethnic Serb. Hard questions need to be asked about whether such trials can truly bring about meaningful reconciliation and durable peace to this post-conflict region when the data suggests that ethnic tensions are becoming more deeply entrenched in communities long after the conflict has ended.

The trial of Mladić will be the last at the UN International Criminal Tribunal for the Former Yugoslavia (ICTY) before it closes its doors at the end of this year, having arrested and tried more than 161 persons, including Slobodan Milosevic – who controversially died during his trial in 2006 – and the Bosnian Serb leader, Radovan Karadžić who was convicted for his role in the Srebrenica genocide last year.

So on the face of it the tribunal seems to have achieved rather a lot. But some would argue, myself included, that the tribunal sidestepped the prosecutions of high-ranking commanders of the opposing armed factions in the war for alleged crimes. So ultimately it must be questioned not only whether justice has been achieved but also whether the tribunal has laid down an accurate historical record of the events that occurred.

We are right to question the success of these institutions that market themselves as beacons of international justice – but the process by which individuals are selected by these institutions for investigation and prosecution also needs to be placed under the spotlight.