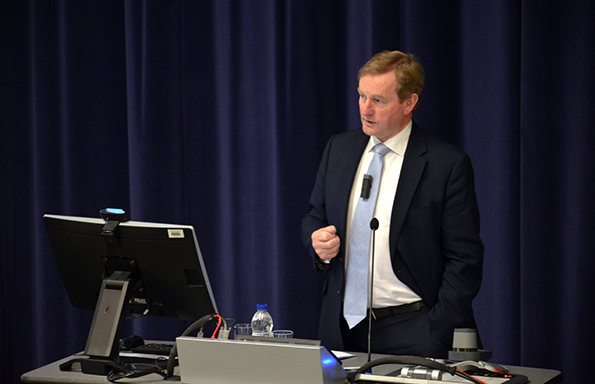 Former Taoiseach of Ireland, Enda Kenny delivered the Institute of Irish Studies’ annual John Kennedy Lecture last night, and urged current political leaders to have “the courage to listen and be pragmatic”.

Speaking under the title, Ireland – England’s place in the Europe of the Future, Mr Kenny was introduced by Institute Director, Professor Peter Shirlow who said that under his leadership Ireland became “tolerant, inclusive and no longer a prisoner of its past”.

The Taoiseach between March 2011 and June this year, Mr Kenny opened with a fictionalised account of the future, to emphasise his view that “we don’t know what the outcome of Brexit will be”.

He said: “When the British Government says what it wants is the closest possible relationship, well that’s what it has now. It’s very difficult to get back to that position.

“If you are removed from the single market and the customs union, it’s impossible to come back to the same position.”

Referring to the ongoing Brexit discussions, Mr Kenny said the EU’s chief negotiator Michel Barnier “speaks with Ireland’s voice”, adding that the border issue must be clarified before talks can progress because, you “can’t sign on for something and hope that it will all come right on the day, it’s far too serious for that”.

Praising the EU as “more than an economic entity…it’s a peace process”, he said: “Britain was never a country, it was an empire, and when it wasn’t an empire, it was a member of the EU”.

He said: “For the last 40 years, trade deals have always been dealt with exclusively by the EU. No British minister in 40 years has negotiated a trade deal on behalf of the British”, adding “I don’t think it will be possible for any British Government to be able to say they have a whole series of new trade deals in a very short period. It doesn’t work that way”.

But he said “there are answers out there” and that Ireland doesn’t want a “return to the past”, adding that it enjoys “very close links with this country and we want to maintain them”.

Enda Kenny was leader of Fine Gael from 2002 and led the party to become the largest political organisation in Ireland, as well as biggest Irish party in the European Parliament and in local government.

Enda Kenny tendered his resignation as Taoiseach on 13 June 2017, and was succeeded by Leo Varadkar the following day.