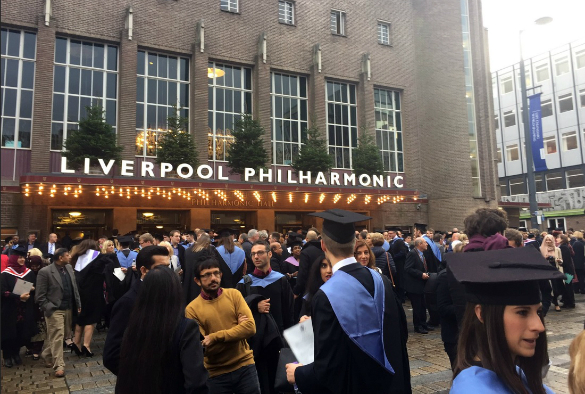 Architect, gallery owner and alumnus, Ken Martin, and the Irish Ambassador to the United States, Daniel Mulhall, are to receive honorary degrees from the University of Liverpool this week.

Ken Martin graduated from the University with a BA in Architecture in 1961. He went on to forge a reputation for himself as an academic, architect and a gallery owner. Among his works, he remodelled the front of the Liverpool Playhouse, designed the new Floral Pavilion in New Brighton and opened his first art gallery The View on Hanover Street – the forerunner of the View Two Gallery.

He is also known as the man who helped to save the Albert Dock from total demolition in the 1970s with a scheme, eventually dropped, to convert the abandoned dock system into a single-site campus for the Liverpool Polytechnic. The delays caused by his ambitious project can be said to have saved the building, ahead of it being made a conservation area in 1976.

Daniel Mulhall was born in Waterford, Ireland, and joined the Department of Foreign Affairs of Ireland in 1978. He has been Ambassador to Malaysia, Thailand, Laos, Vietnam and Berlin.

Also being honoured as an honorary fellow is Eileen Thornton, an alumna who joined the University’s Department of Physiotherapy in 1992 and worked here until her retirement in 2016.

She became Associate Pro-Vice-Chancellor for Education in the Faculty of Health and Life Sciences in 2012 and she was awarded a CBE for her services to healthcare education and training.

Speaking on the honorary awards, Vice Chancellor Professor Janet Beer said: “I am delighted to be honouring such esteemed individuals at our winter graduation ceremonies. Their individual achievements in the fields of architecture, diplomacy and teaching, and the contribution they have made to the work of the University and the fabric of the city also means they are excellent role models for our graduating students.”

The honorary degrees will be conferred at ceremonies on Tuesday, 5 and Wednesday, 6 December 2017 ceremonies at the Liverpool Philharmonic Hall.

You can watch the ceremonies live by visiting this webpage: