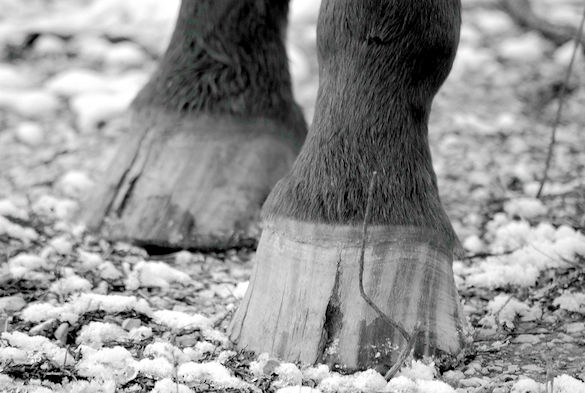 A new review ‘Paradigm shifts in understanding equine laminitis’ published in The Veterinary Journal, demonstrates how University of Liverpool led research has changed the way we think about a crippling disease of horses.

Laminitis is one of the most serious diseases of horses, ponies and donkeys. It is a painful condition of the tissues (lamellae) that bond the hoof wall to the pedal (coffin) bone in the horses hoof. Severe and recurring cases of laminitis can cause chronic painful lameness or result in the horse being destroyed to prevent further suffering.

For the past decade, researchers, led by Professor Cathy McGowan from the University’s Department of Equine Clinical Science and Institute of Aging and Chronic Disease, have systematically investigated laminitis caused by hormonal dysregulation, endocrine laminitis.

She led ground-breaking research that showed laminitis was directly caused by insulin, an important hormone involved in dietary glucose (from carbohydrates) control, which overturned previous held theories of laminitis. This new knowledge has now paved the way for improving the veterinary industry’s understanding of this terrible disease, and improving future research and treatment.

The researchers highlighted three major advances in the understanding of this disease.

First, laminitis is now considered to be a clinical syndrome associated with a disease that affects a number of organs and tissues, or affects the body as a whole (systemic) or altered weight bearing rather than being a discrete disease entity.

Next, laminitis associated with the endocrine system, endocrine laminitis, is now believed to be the predominant form in animals presenting (primarily) for lameness.

These simple but important paradigm shifts have several implications, the main one being that an accurate diagnosis of the associated systemic disease (most commonly endocrine disease) would be pivotal for laminitis management, prognosis and the prevention of recurrence.

Third, from a series of histological studies Professor McGowan led in conjunction with Veterinary Pathologist Janet Patterson-Kane and PhD student Ninja Karikoski, showed that under the microscope, the changes in the hoof lamellae were subtle in comparison with previous descriptions and most importantly, there was evidence of a prolonged subclinical phase in at least some horses, as evidenced by the development of divergent hoof rings visible on the hoof wall.

These hoof rings may signify a vital window of opportunity for horse owners and their veterinary surgeons to recognise and apply therapeutic intervention before painful laminitis occurs.

Under the microscope it was clear that instead of severe basement membrane failure (as had been proposed based on experimental models in severely systemically ill horses), stretching and elongation of the lamellar cells is an early and key event in the disease and this knowledge will inform research directions in the future.

Professor McGowan, Head of Department of Equine Clinical Science, said: “These findings completely change the way we think about a very important disease in horses. This is very important to the equine industry and veterinary profession and will be the basis of future research directions.”

More information regarding Professor McGowan’s research can be found here and here.

For more information about laminitis please visit our Laminitis information site which can be found here.