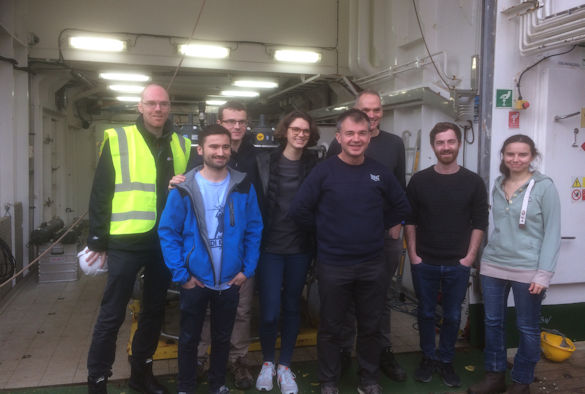 Ocean scientists from the University of Liverpool have set sail on a six week research expedition to the Mid-Atlantic ridge to conduct the first ever assessment of whether the region is a significant source of iron to the ocean.

Led by Dr Alessandro Tagliabue from the Department of Earth, Ocean and Ecological Sciences, the expedition on board RRS James Cook, an advanced research vessel, will sail to Guadalupe in the Caribbean, collecting and analysing water samples taken at the location of known hydrothermal vent systems along the spine of the mid Atlantic ridge.

The main objective of the expedition is to document the distributions of trace metals in the North Atlantic and how they vary on and off the Mid-Atlantic Ridge and examine the mechanisms driving the magnitude of hydrothermal trace metal plumes at different hydrothermal sites along the Mid-Atlantic Ridge, a band of mountains and valleys that run along the Atlantic Ocean floor. 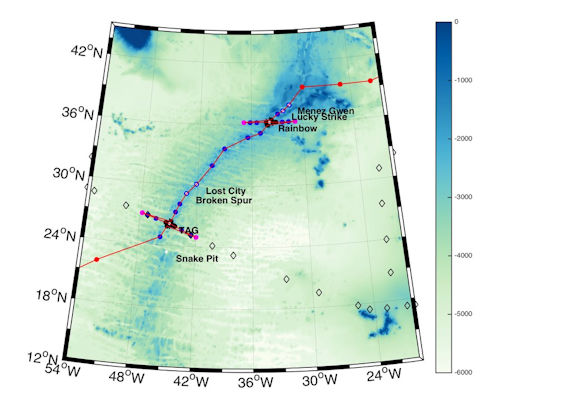 Alongside Dr Tagliabue will be an international research team consisting of 27 scientists from the Universities of Liverpool, Southampton, Oxford and Plymouth Marine Laboratory, as well as the Universities of Washington, California Santa Barbara, Southern Mississippi and South Florida who depart from Southampton on Wednesday 20 December and arrive in Guadeloupe in February 2018.

Dr Tagliabue said: “This is an important and exciting cruise on RRS James Cook which will add to our scientific understanding and knowledge of how strongly the injection of iron by hydrothermal venting affects iron levels in the upper ocean.

“This is important as iron is a critical resource limiting surface ocean productivity, which then drives uptake of carbon dioxide from the atmosphere, oxygen production and the maintenance of marine ecosystems. At present the models we use to project the impacts of climate change on biological activity in the ocean may be missing an important part of the story. The mid Atlantic ridge has never before been sampled for iron and we do not know how much iron is being supplied from the numerous submarine volcanoes dotted along its length.”

“We will be away for the Christmas and New Year period but we will celebrate on board RRS James Cook where the crew will put on a special Christmas dinner during a day off from the science schedule.”

The research is part of the international programme, GEOTRACES, which aims to improve the understanding of biogeochemical cycles and large-scale distribution of trace elements and their isotopes in the marine environment.

Here is a news piece about the expedition in the Southern Evening Echo, including plenty of photos on board RRS James Cook taken just before they set sail: http://www.dailyecho.co.uk/news/15783265.Christmas_at_sea_for_Southampton_scientists_about_to_take_on__quot_groundbreaking_quot__new_research/

To find out about undergraduate and postgraduate opportunities to study ocean sciences at Liverpool, please visit this webpage: