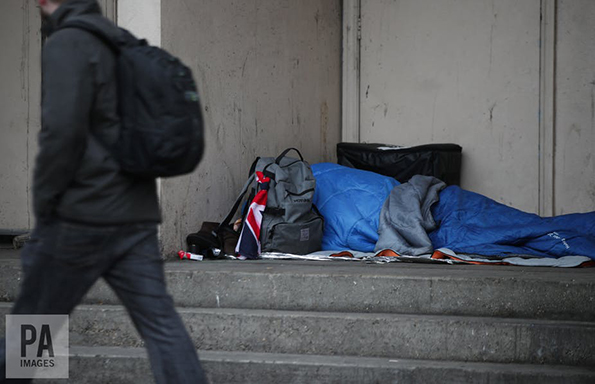 The Home Office is no longer able to treat rough sleeping by EU citizens as an abuse of their free movement rights. A December ruling by the High Court in a case brought by a Latvian man called Gunars Gureckis is both welcome and important. It puts paid – for the time being at least – to a government policy that exposed people to detention and removal for sleeping on the streets.

The policy was introduced in Home Office guidance in February 2017, though mention of it online was removed after the High Court ruling. But the very existence of the policy in the first place – and the fact the government still has the option of removing EU citizens for “failing to exercise” their rights under EU law – demonstrates the ongoing vulnerability of people on the margins of society.

This has wider ramifications. In the same week that the Gureckis decision was delivered, the EU accepted that there had been “sufficient progress” in Brexit negotiations, including on the issue of EU citizens’ rights in the UK, for talks to proceed to the next stage. Such progress was made, in part, because the UK agreed that all EU citizens living in the UK in accordance with EU free movement law on exit day would be protected by a future withdrawal agreement.

But the Gureckis judgment shows that those EU rules can struggle to safeguard those most in need of their protection. It calls into question the appropriateness of relying on laws surrounding EU free movement as a reference point for securing EU citizens’ residence rights as Brexit approaches. Instead, those drafting the final deal must ensure that a variety of voices are heard as the UK withdrawal progresses – especially those of individuals who have long fallen through the safety net meant to apply to EU citizens in the UK.

Read more: What the Brexit deal means for EU citizens and their families

The High Court held that although EU law allows member states to withdraw EU citizens’ residence rights in cases of “abuse”, this does not include rough sleeping. EU citizens are able to stay in the UK for the first three months after entry if they hold a valid identity card or passport, and do not become an unreasonable burden on the social security system.

They may reside for longer if they are job-seekers, workers, self-employed or self-sufficient. No accommodation requirement accompanies these residence conditions – and the court ruled that rough sleeping by people who are working, which the government claimed is done to avoid accommodation costs, could not be considered an “abuse” of free movement rules.

This meant that the Home Office policy to deport rough sleepers was discriminatory, because it treated EU citizens differently from British rough sleepers. The High Court also found that the targeted questioning of EU rough sleepers by immigration officers on the presumption that they were abusing free movement rights was actually prohibited under EU law.

Too late for many

At first glance, the ruling suggests that EU law is able to protect vulnerable EU citizens from systematic removal. A closer look, however, reveals that the rules can be open to a broad interpretation by governments in pursuit of restrictive immigration policy. When these policies affect already marginalised individuals, such as rough sleepers, they can continue unchallenged for a considerable time.

Gureckis and his co-claimants were only able to contest the Home Office guidance with the support of pro bono organisations, including the Public Interest Law Unit at Lambeth Law Centre and North East London Migrant Action. The formal roll-out of the guidance in February was preceded by a pilot scheme called “Operation Adoze”, which ran in London in late 2015, itself preceded by smaller Home Office initiatives in 2010 and 2013.

These earlier operations did not exclusively rely on the definition of rough sleeping as an abuse of free movement rights – the route now ruled unlawful by the High Court. Instead, administrative removals happened on the basis that, because EU citizens could not demonstrate that they were working, self-employed or self-sufficient, they were not exercising their rights. The Home Office still continues to remove individuals on this basis.

Though the Home Office has now removed reference to rough sleeping as an abuse of free movement in its guidance, it seems likely that “persistent rough sleeping” will still be used as an indicator that an EU citizen is not legally resident, which could lead to removals. Even those rough sleepers in work, or benefiting from permanent resident entitlements, will often face significant difficulty gathering the paperwork necessary to provide evidence of their right to stay.

Alongside rough sleepers, those in precarious, temporary, low-paid or unpaid work often struggle to demonstrate that they have been “legally resident” under EU law to the satisfaction of the Home Office. This might be because they fail to meet technical EU requirements, such as having comprehensive sickness insurance during periods of unemployment, or because of the significant challenge of compiling evidence of multiple jobs over historical periods. As the current deal on citizens’ rights confers residence entitlements on those living in the UK in accordance with EU rules on Brexit day, these technical and administrative challenges could limit how much the future withdrawal agreement can protect their rights.

The residence insecurity facing all EU citizens in the UK following the June 2016 referendum has at least put some of these issues under the microscope. The government committed to dropping the requirement for comprehensive sickness insurance, after the press caught wind of the negative impact this was having on the residence applications of long-term EU workers. For similar reasons, the UK pledged to introduce easier application procedures, and to draw on its own income tax data to inform decisions. While this caters for those in long-term, permanent work, those in precarious or unpaid work are still at risk – though the government has vowed to abandon the requirement that work must be “genuine and effective” to count.

After Brexit, and the transitional period which is likely to follow it, EU citizens will need to possess residence documents to have a right to reside in the UK. Obtaining a document ahead of immigration checks or for presentation to prospective landlords or employers, will be very difficult for those living on the streets and present challenges for many more besides.

The government’s new application procedures must therefore be rigorously scrutinised, and a wide range of voices must be able to contribute to that examination. Those who faced residence insecurity as a result of administrative policy well before the Leave vote, and are likely to be most affected by Brexit, must be heard.