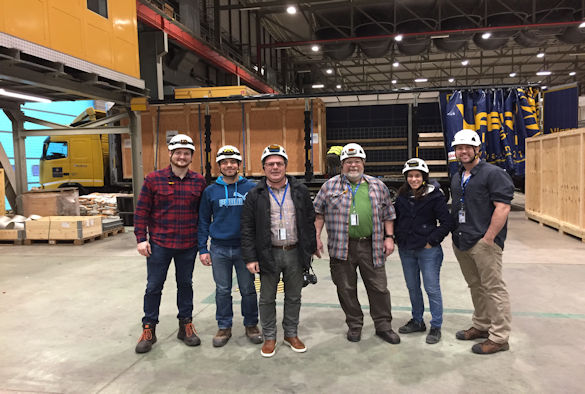 ProtoDUNE core installation team with the first arrival from Daresbury. Professor Touramanis is 3rd from left

Liverpool physicists are celebrating after a vital component of the global neutrino experiment – the Deep Underground Neutrino Experiment (DUNE) – which they have helped construct has been delivered to CERN for testing.

The DUNE experiment is a flagship international experiment which will study the differences between neutrinos and anti-neutrinos in a bid to understand how the Universe came to be made up only of matter. Fermilab, the largest US particle physics national laboratory, near Chicago, is the host laboratory of DUNE.

Liverpool physicists are part of the UK team that has completed their first prototype Anode Plane Assembly (APA), the largest and most crucial component of the DUNE detector, to be used in the protoDUNE detector at CERN.

The APA was built at the Science and Technology Facilities Council’s (STFC) Daresbury Laboratory and is the first such device made in the UK. Two more APAs will be built at Daresbury by next summer for the protoDUNE experiment at CEEN, and 150 APAs will be produced over a two to three year period for the actual DUNE experiment and delivered for installation one-mile underground at the Long Baseline Neutrino Facility’s (LBNF) Far Site in a former gold mine in South Dakota, USA.

The APA is a large rectangular steel frame covered with approximately 4000 wires that are used to read the electric charge signals from the liquid-Argon detector. At 2.3m by 6.3m it is roughly as large as five full-size pool tables led side-by-side.

Professor Christos Touramanis, leader of the University’s DUNE team and of the protoDUNE experiment said: “DUNE is a game changer in the international neutrino programme. Today we are celebrating an exciting major milestone for Liverpool and the UK participation to the DUNE project.

“Liverpool has been a founding member of DUNE and our leadership in the prototyping programme for the key instruments is an important step towards the great scientific discoveries that we expect to come from this programme.”

The first APA began the journey to CERN by road on 12 January 2018 and arrived in Geneva today (16 January 2018) where it was received by members of the protoDUNE experiment. The protoDUNE international experiment at CERN is assembling and will operate from summer 2018 the largest and final prototype for the DUNE underground liquid Argon detector. ProtoDUNE is led jointly by Professor Christos Touramanis of Liverpool University, and a Fermilab scientist.

DUNE is an international collaboration with a membership of over 1,000 scientists and engineers from 30 countries. They will use their detectors to study the intense neutrino and antineutrino beams produced by the LBNF facility at Fermilab at their production point and after they travel 800 miles through the earth to the South Dakota facility.

The UK is making a major investment and important leading contributions in the DUNE-LBNF billion-dollar megaproject and construction of APAs is one of the key elements of this investment.

DUNE will also watch for neutrinos produced when a star explodes, which could reveal the formation of neutron stars and black holes, and will investigate whether protons live forever or eventually decay, bringing us closer to fulfilling Einstein’s dream of a grand unified theory.