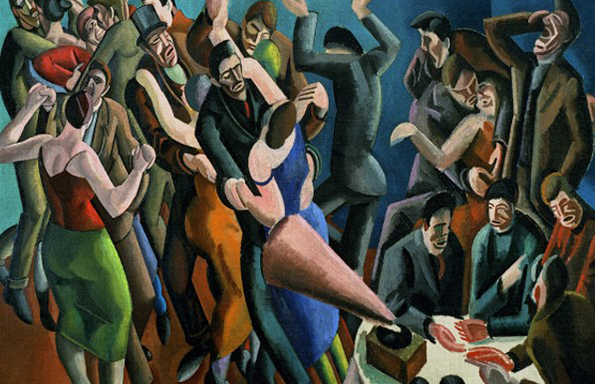 An exhibition curated by Head of the University of Liverpool’s Department of Music, Professor Catherine Tackley celebrating 100 years since jazz reached Britain opens in London next week.

Produced in partnership with The Arts Society, also marking its 50th anniversary, the major showcase will bring together painting, prints, cartoons, textiles and ceramics, moving film, instruments and the all-important jazz sound to explicitly examine the influence of jazz on British art, design and wider society.

Curator, Professor Tackley said: “This exhibition tells the story of the ever-popular jazz age in new ways, focussing on British depictions of jazz to understand what the music meant to artists, assessing the resultant image of jazz in the public sphere as well as considering how jazz was encountered in everyday, domestic environments.

“Above all, the exhibition links the music with the aesthetics of art produced in response to it, uniquely foregrounding the impact of jazz music on ‘jazz age’ art.”

Jazz provoked reactions ranging from devotion to abhorrence when the idea and then the sound of the music first entered the consciousness of the British public in the aftermath of the First World War.

Visiting American groups such as the Original Dixieland Jazz Band and the Southern Syncopated Orchestra offered Britons their first chance to experience the music live.

Rhythm & Reaction: The Age of Jazz in Britain will highlight how the new jazz sound in post-War nightclubs and dancehalls provided exciting and dynamic material for British artists.

Bold depictions of lively dancers by William Roberts and Frank Dobson, will be displayed alongside the Harlem-inspired paintings for which Edward Burra, one of Britain’s foremost Modernist painters, was well-known.

The growing interest in jazz brought black and white musicians, artists and audiences together, and was crucial in influencing changes in British society; moving from stereotypes descended from the minstrel show to a more nuanced understanding of and interest in African American and black British culture.

New technology enabled the dissemination of jazz in popular culture, bringing it within easy reach of the general public with theatre, film, radio, and records. Through newspapers and magazines, like Melody Maker, Rhythm and Tune Times; Rhythm & Reaction: The Age of Jazz in Britain will show how publications not only distributed jazz but provided a space for visual artists to experiment with its aesthetic in print.

Advances in commercial reproduction gave the domestic market access to the jazz-influenced contemporary designs in textiles and ceramics. Just as radio and records were bringing jazz into the private realm, examples of Carlton Ware and Clarice Cliff ceramics and Arthur Sanderson textiles will demonstrate how the cultural response to jazz allowed Britons to encounter both the look and the sound of jazz at home.