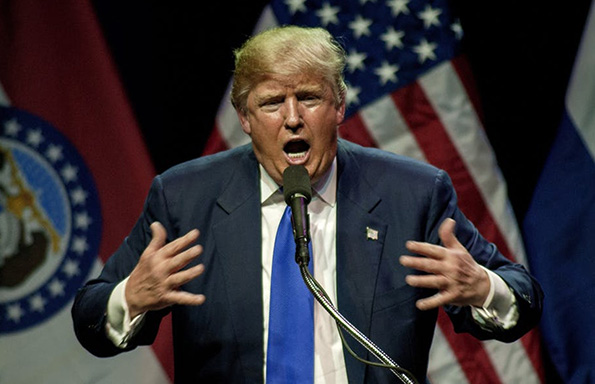 ‘Trumpisms’ are mainly a matter of Trump’s style, rather than new words. Actually, what is striking about them is their clichéd nature – he has a fondness for stock phrases.

He particularly likes what linguists call ‘discourse markers’ – words like ‘anyway’, ‘so’, ‘you know’ etc. What’s different about Trump is that he uses them in political speeches to get from one topic to another, and the second topic is often not related to the first. This is usually accepted in normal conversation, but not in political speeches.

To Trump’s supporters, this gives him an air of authenticity – he makes a big deal of not using pre-scripted professionally written speeches. But to his opponents, it makes him sound incoherent. Both sides are, of course, right: authenticity is incoherent. A dilemma faced by all politicians in speaking is how to sound authentic while having ironed out all of the incoherencies of natural speech. Most politicians try to get round this dichotomy by using a prepared script, but use paralinguistic features such as gestures, intonation patterns etc. to try to sound ‘spontaneous’. Trump really is spontaneous!

The dichotomy is brought into sharpest focus by what is by far the most common Trumpism, ‘believe me’. Again, to his supporters this is a sign of the common touch, of Trump using the same discourse markers that ordinary folk do in everyday speech. Discourse markers aren’t usually invested with much meaning; they instead have a function, in this case of indicating something like ‘Listen up: what I’m going to say next is especially important’, and this is how his supporters interpret it. But his opponents take the meaning of ‘Believe me’ literally, and sceptically think that Trump can’t be believable if he has to tell his listeners to believe him all the time. All of which goes to show, by the way, that a politician’s (or anyone’s) language use tends to reinforce the views people already have of them, rather than change those views.

Another favourite Trump formula is ‘We’re going to …’ (or ‘We’re gonna …’), which makes him sound like a man of action rather than thought; he’s someone who’ll get things done unlike the ‘experts’ who’ll just think about it; the categorical assertion (even when he was merely a candidate) combined with the plural ‘we’ invites his audience to share in his self-belief and the sense of a common undertaking.

I think it’s unlikely that these discursive features will have longevity among professional politicians – traditional politicians’ rhetoric is too deeply embedded in the business of ‘doing politics’. But it’s interesting that Oprah Winfrey is emerging as a possible presidential candidate for 2020, since she’s also not from a professional-politician background, is known for her use of ‘ordinary language’, and self-presents as ‘authentic’. In terms of individual words, e.g. ‘bigly’. They’re unlikely to last, since people are reluctant to use terms which have been held up to ridicule. Everyone remembers Trump’s use of ‘bigly’, but he only used it once (the same is true of ‘covfefe’); what people remember is Trump’s usage – they don’t adopt it themselves

‘Bigly’ is actually an old word that Trump has resurrected (he claims it’s a mis-hearing of ‘big league’, but that doesn’t matter – it’s how people interpret it that counts). What’s significant here is that it’s another example of Trumpism as a stylistic feature – he likes adjectives and the adverbs that are derived from them.

The adjectives are particularly useful for insulting opponents, and Trump’s use of two-word adjective plus name combinations are very effective in this regard, e.g. ‘crooked Hillary’. Hillary Clinton will for evermore be considered ‘crooked Hillary’ even in the minds of her supporters – it has now in effect become her name.

Another discursive strategy that Trump likes is exaggeration, and words and phrases such as ‘bigly’ ‘huuuuge’, ‘millions and millions’, and ‘a lot’ impress his supporters without committing him to the specifics of details. Likewise, another well-used Trumpism is the non-attributable third party, e.g. ‘People say …’. This allows Trump to peddle ideas which he knows to be untrue, without those ideas being attributable to him.

Twitter is a natural medium for Trump, because he likes brevity – short words, short segments of discourse. This is consistent with his businessperson’s worldview: complex problems are actually simple problems, which have simple solutions that he will provide through his can-do attitude. Monosyllabic words and a limited number of characters do not lend themselves to analysis, but Trump does not need analysis – for him the world is a purely instrumentalist system of cause and effect (Jeremy Corbyn is his diametric opposite in this respect).

I’m not sure that Trump has influenced language, other than in a trivial way. The examples of any individual, no matter how powerful they may have been, influencing language in any significant way are remarkably few. Stalin and the Russian Communists in the 1930s introduced a fashion for clipping and blending (e.g. ‘Comintern’). More recently, Tony Blair had a habit of using what linguists call ‘transitivity features’ to disguise who was bringing about processes, e.g. ‘Change sweeps the world’ (whereas in reality people (who?) change things).

Both of these phenomena have caught on in domains where people are trying to persuade other people, especially advertising. But Blair’s most significant contribution to the English Language comes not from what he said, but from what he did, with a new meaning attaching to the word ‘spin’, and the introduction of the term ‘spin doctor’.

More
The tycoon as President, from Berlusconi to Donald Trump