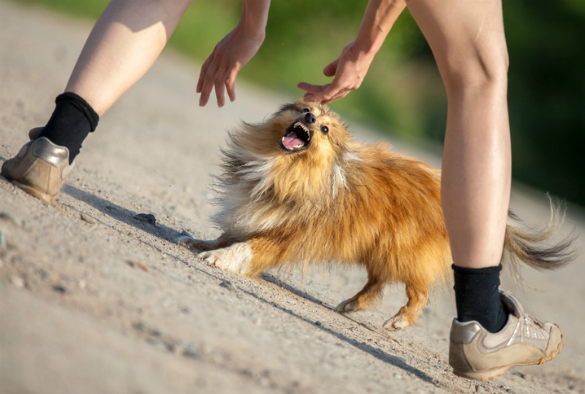 Personality type may be linked to a heightened risk of being bitten by a dog, with people of a more anxious disposition more likely to be nipped, a new University of Liverpool study suggests.

And the actual number of dog bites may be nearly three times higher than hospital records indicate, the findings published in the Journal of Epidemiology & Community Health show.

There are 8.5 million dogs in the UK and more than 6500 people require hospital admission for dog bite injuries every year in England. But hospital records don’t differentiate between bites and other injuries inflicted by a dog.

To try and obtain more accurate and up to date figures, the researchers surveyed 694 people in 385 households in a semi-rural town in Cheshire, England.

They wanted to know how many people had been bitten by a dog; whether the bites needed treatment; and whether the victims knew the dog that had bitten them. Participants were additionally asked whether they owned a dog themselves.

One in four respondents said they had been bitten before, with men almost twice as likely to have been bitten as women.

People who owned several dogs were more than three times as likely to have been bitten as those who didn’t own dogs, and more than half (just under 55%) of respondents said they had been bitten by a dog they didn’t know.

Hospital records show the rate of dog bites is 740 per 100,000 of the population, but the survey responses indicate a rate of 1873 per 100,000–nearly three times the official figure.

One in three (33%) dog bites required treatment, but only a small proportion (0.6%) required hospital admission.

The researchers caution that this was an observational study so no firm conclusions can be drawn about cause and effect, added to which only households in one county in England were included in the study, so the findings may not be applicable to the rest of the UK. Nor did they consider potentially influential factors such as sex, age, and breed of the biting dog.

Lead researcher Dr Carri Westgarth, a dog behaviour expert at the University’s Institute of Infection and Global Health, commented: “Although this was a small study, the findings are insightful and provide much improved indicators of the true burden of dog bites on public health.

“The suggested link between victim personality and risk of being bitten requires further investigation and potential consideration in the design of future bite prevention schemes.

“In order for the UK to develop effective prevention strategies it is also essential that previously assumed risk factors are reassessed, as this study has also revealed that prior beliefs, such as bites typically being from familiar dogs, are contested.”

The paper ‘How many people have been bitten by dogs? A cross sectional survey of prevalence, incidence and factors associated with dog bites in a UK community’ is published in the Journal of Epidemiology & Community Health [doi 10.1136/jech-2017-209330]