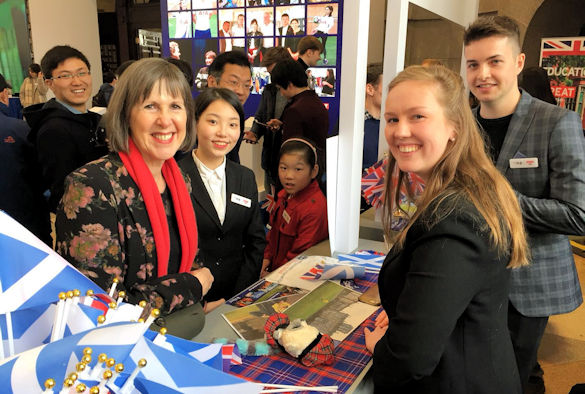 The new campus, to be constructed in the city of Taicang, will mirror aspects of XJTLU’s existing provision, offering a high calibre, international higher education experience with the opportunity to study both in China and in the United Kingdom. It is proposed that the campus will open in 2020 and it is anticipated to grow to a community of 6,000 students by 2025.

Dame Janet said, “Xi’an Jiaotong-Liverpool University has established itself as an outstanding example of Sino-British collaboration in higher education. I am delighted that we, together with XJTLU and Xi’an Jiaotong University, and in partnership with the Taicang City Government, are building on this international success.

“The new campus will forge innovative, dynamic relationships between the university, local companies, and society, providing highly-skilled, international graduates and contributing to the knowledge economy.”

The campus will enable new and innovative links to be formed between XJTLU, industry and the local community in Taicang, supporting sustainable development and providing opportunities for students to spend time working with and within the city’s expanding industrial base. A key focus will be to develop graduates in science and technology with expertise in AI and robotics who will go on to lead new industries.

Professor Youmin Xi, Executive President of XJTLU, and Honorary Pro Vice-Chancellor at the University of Liverpool, said: “The new Taicang Campus meets our ambitious mission to develop the ‘University of the Future’, establishing a new relationship between the university and companies, industries, and the wider community.”

Launched in 2006, XJTLU is a joint venture between the University of Liverpool and Xi’an Jiaotong University, which has rapidly grown to a diverse international community of more than 12,000 students and 1,000 staff, who come from more than 50 different countries. It is ranked as the Number 1 joint venture university in China and is the largest of its kind in the country.

The partnership is based at the modern, purpose-built XJTLU campus in the city of Suzhou and its students gain both Chinese and UK degree accreditation. Many XJTLU students opt to finish their degree overseas, and there are currently around 3,000 studying at the University of Liverpool. A number of University of Liverpool students take the opportunity to spend a year of their studies in Suzhou.

The proposed campus in Taicang will include space dedicated to research, learning and teaching, and innovation and entrepreneurialism. It will also have a dedicated library, sports facilities and accommodation for students and staff, and be designed to support an international community in an eco-friendly environment.

The new campus is expected contribute to the overall growth of XJTLU to 24,000 students by 2028.